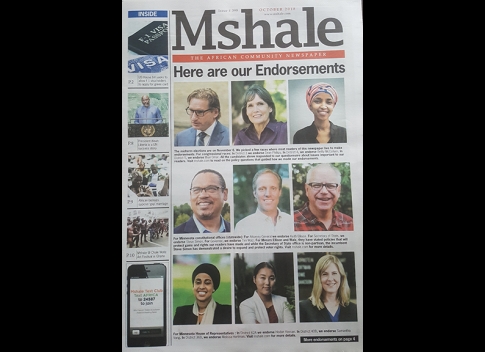 The midterm elections are on November 6 and as previously announced, Mshale was going to make endorsements in areas around the Minneapolis/St. Paul metro area where many of our readers reside. We reach a global audience through mshale.com and are indeed regarded as an authoritative voice for the African immigrant community in the Americas but a lot of our news reporting and operations still emanate in Minnesota.

How we made our endorsements

As announced in a previous post, we picked some races to make endorsements on. We sent questionnaires to the candidates which most returned. If a candidate did not return the questionnaire we determined they were not interested in our endorsement.

Our determinations were made based on the candidate responses and also what our readers had told us was important to them.

A top concern for our readers was immigration, followed by healthcare and education.

On the reduced numbers of refugees since president Trump came to office “While we cannot possibly accommodate everyone who wishes to come to the United States, we have a moral responsibility to provide safe haven to as many of those who – like my ancestors and those of many Americans – are fleeing persecution or violence abroad as possible, without overwhelming our immigration system or jeopardizing our ability to vet them.”

On Foreign Affairs, Congresswoman McCollum responded to our question on how president Trump should eb graded by saying she will give him an F “With regard to Africa, in addition to blatantly insulting our African allies, Trump wants to abandon commitments to improve food security, poverty alleviation, and resettle African refugees in the U.S. The fact of the matter is, with regard to foreign policy, this administration is a disaster”.

McCollum also expressed similar views on healthcare and immigration to Dean Phillips above and Ilhan Omar below and thus earns our endorsement.

Omar does not support the elimination of the Diversity Visa Lottery. She further says in her response to Mshale’s questions that “Undocumented immigrants need clear and accessible paths to citizenship. This means that we must pass a clean DREAM act in Congress for all DACA and TPS recipients as these programs alone will not be enough for individuals in need. I stand against any increased barriers to citizenship and will advocate for the elimination of Immigration Customs Enforcement (ICE)”.

Furthermore, Omar stated that she opposes moves to eliminate or weaken one of Obama’s signature achievement the Affordable Care Act (ACA).

Omar also supports the DREAM ACT for those on DACA.

Mshale has editorialized on similar views as those held by Omar above and thus she earns our endorsement.

For the US Senatorial races, Mshale did not send questionnaires to the candidates as the differences between the candidates is clear in their publicly stated and published policies. Opponents to the above two candidates have espoused policies inimical to the interests and well-being of our readers and many recent immigrants. We therefore did not use valuable and finite editorial resources to send questionnaires to candidates running for the US Senate in Minnesota as we did with most others where we are endorsing.

Therefore, for November 6, Mshale endorses Amy Klobuchar and Tina Smith in the two Minnesota US Senate seats up for reelection this year.

District 36B: We endorse Melissa Hortman.

District 40B: We endorse Samantha Vang.

District 62A: We endorse Hodan Hassan.

Hennepin County Board of Commissioners

The Hennepin County Commissioner race in District 4 is the only county level race Mshale is issuing an endorsement and we endorse incumbent Peter McLaughlin. Hennepin County is the largest in Minnesota and home to most African immigrants in our state. McLaughlin is the only candidate that responded to our questions and given that there is not much difference in policy between him and a candidate we very much admire, Angela Conley, we appreciate the fact that he took the time to thoughtfully respond to our questions.

We believe if reelected he will continue to serve the interests of our community in what possibly will be his last time running for reelection, as we believe time is ripe to give way for new blood and energy.