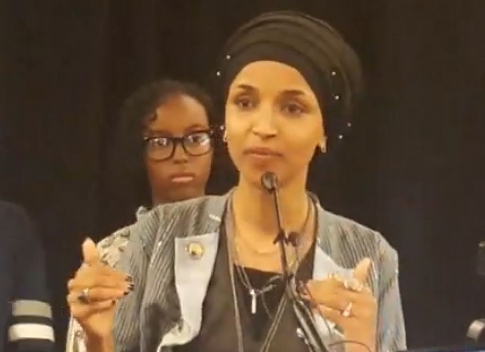 Ilhan Omar, who two years ago made history by becoming the first Somali-American ever elected to a US state legislature, made history again Tuesday when she notched up more firsts by winning the Minnesota fifth congressional to become the first black person born in Africa to be elected to the U.S. Congress.

Along with Rashida Tlaib of Michigan, Omar and the Detroit-born Palestinian-American Tlaib will also become the first two Muslim women to serve in the U.S. Congress. Omar is a refugee who spent four years of her childhood in a refugee camp in Kenya. She succeeds Keith Ellison, who was the first Muslim to serve in the U.S. Congress. Ellison opted to run for Minnesota Attorney General which he won, making him the state’s first black Attorney-General.

“I could not standby on the sidelines and see the promise of America not being kept,” said Omar as her husband, Ahmed Hirsi, and their three children stood behind her on stage.

To wild applause, she pledged to take the fight to Washington and also repeated a campaign promise to abolish the Immigration and Customs Enforcement (ICE) agency.

“Here in Minnesota, we not only welcome immigrants, we send them to Washington,” she told the multiracial crowd that propelled her to victory. She warned them that her victory does not end the struggle against bigotry and that they must stand to defend America’s democracy which is at stake.

“She has always been a smart kid growing up,” a beaming Nur Omar Mohamed, Omar’s father, told Mshale when asked whether he ever dreamed of her daughter ever bouncing a United States congresswoman. “I always knew she will be something but this is something else.”

A sea of international media, from as far as Japan and the BBC’s Nairobi crew were present to capture the historic moment.

Pat Paulson, a realtor, has lived in the fifth district his whole life. During that time, it has been represented by only three representatives, Martin Sabo and Keith Ellison. “It is truly an historic election and I have supported Ilhan as soon as she announced she was running as she was committed to fighting the “politics of fear,” said Paulson.

“She not only understands the social issues that face our society but I am also a relator and businessman and Ilhan has shown a good grasp of the issues that face small business in our district,” Paulson said.

“This is history for all of Africa,” a smiling Abdulrahman Kahin said. Kahin, an immigrant from Djibouti said going forward those born in Africa like him will now have a voice in Washington.