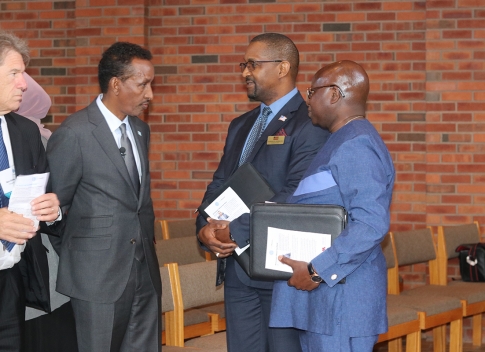 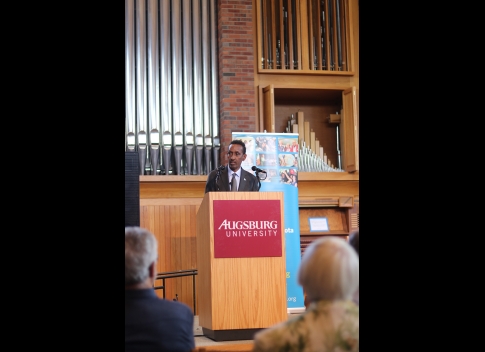 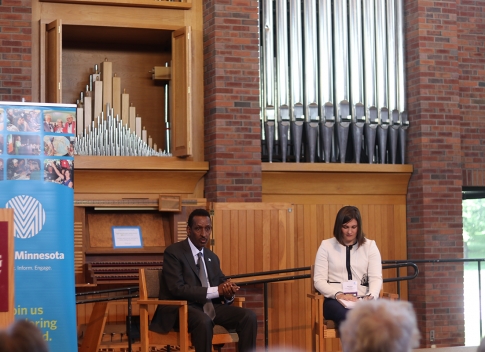 MINNEAPOLIS (Mshale) – Somalia’s Minister of Foreign Affairs and International Cooperation, Ahmed Isse Awad, spoke Monday at a Global Minnesota event about his country’s emergence from years of civil war and the progress attained thus far. The minister spoke about the current economic and political aspects of Somalia as well as the nation’s efforts to rebuild after war. The civil war which began in 1991 led to food insecurity, terrorism, and economic strife. The calamities sent millions of Somalis fleeing abroad to neighboring African countries and as far as the United States, Europe. The war resulted in a Somali community diaspora with a population of over two million, according to the minister.

The event was held at Augsburg University, located in the Cedar Riverside neighborhood which is home to a large Somali community. The university’s president, Paul Pribbenow, in his opening remarks said the university has created partnerships with the area residents and has a student body that is 10 percent Somali American. The Minnesota community has been culturally enriched with the presence of the Somali community and Minnesota is “the warmest place in terms of people’s hearts in terms of a desire to make the world a better place” said Pribbenow.

“I have good news to report without exaggeration” said Awad. Somalia’s a country undergoing reconstruction after years of civil war and unrest. The East African nation is no longer consumed by starvation, terrorism, insecurity, and in the presence of a collapsed state. “I am here to report that we have made progress” Awad said in a room full of Minnesotans.

“We want you to look at Somalia with a different perspective. Somalia is transforming is defeating terrorism and becoming more and more peaceful.”

The rebuilding of Somalia has been a progress largely aided by the Somali diaspora in the United States, said Awad. Currently Somalia has one of the largest numbers of remittances in the world with the total amount sent from the diaspora to the main land totaling around 1.4 billion dollars annually. This figure is larger than the amount of money that Somalia receives in foreign aid and contributes to 23 percent of the country’s gross domestic product.

Despite the challenges at home, members of the diaspora have been thriving abroad. Minister Awad pointed to the number of business success that has been accomplished by Somalis outside of the homeland. “The highest building in Nairobi is being built by a Somali, the highest building in Djibouti is being built by a Somali” said Awad. In Minnesota, 24,000 different Somali businesses generate about $489 million dollars annually.

“Somalia’s back,” Awad said pointing to the earlier success of the democracy. In 1968 Somalia had welcomed Vice President and Minnesota native Hubert Humphrey to its shores. The leader stated that Somalia had the strongest democracy in Africa a statement that came long before the civil war left the country in strife and the state collapsed. Somalia had lived without an organized state for 40 years. The government is making efforts to rebuild the country’s state organically by formulating a system that is for Somalis by Somalis.

“In twenty-five years, we will see Somalia that is peaceful with itself, peaceful with its neighbors, contributing to the peace and security of the region and of the world, economically prosperous [and] well governed.”