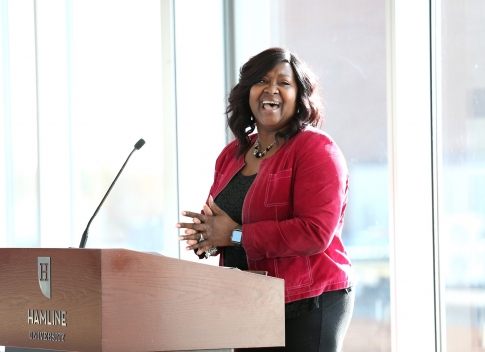 On Wednesday November 23 the Council for Minnesotans of African Heritage held its first annual summit. The summit which was held in Hamline University attracted 112 attendees.

The purpose of the summit was “to give the community members a platform to talk about the work that they’re doing in the community,” the council’s office manager Shakira Bradshaw said.

The council for Minnesotans of African Heritage was created in 1980 to ensure that all people of African heritage fully participate in and equitably benefit from the political, social, economic resources, policies and procedures of the state of Minnesota. The organization has a full staff and a board that is appointed by the Governor of Minnesota.

Since its inception 39 years ago the council has worked tirelessly to support and pass legislation that improves the lives of Minnesotans, ensuring those of African heritage are not overlooked in the state’s economic and social advancement. The council also acts as a liaison to both the federal government and local government units and private organizations on matters relating to people of African Heritage in Minnesota.

The event featured a series of community led workshops which included discussing and understanding the African-American Preservation Act, a bill sponsored by representative Rena Moran of Saint Paul. The bill aims to address racial disparities in the state’s child welfare system. It tries to minimize out-of-home placements and promote reunification of families and children belonging to disproportionately represented groups in the state’s child welfare system.

Another topic of discussion was on fatherhood in the community presented by the Fatherhood Coalition. The opioid crisis as well as public safety were also a topic of conversation. There was also a reparations lunch, with a presentation from the Black Civic Network. Reparations, which have been a heated topic of media discussion, are a way that post-conflict states can provide redress to victims in the transitional justice process. The presentation educated the attendees on the history of reparations, the need for social justice and actionable steps that can be taken after the presentation.

Prior to the closing address by the council’s executive director Justin Terrell, Representative Mohamud Noor of District 60B delivered a speech on housing. An important topic as the cost of living has been skyrocketing it has become increasingly more challenging for low income families to find adequate housing.

The council’s presence in the community is important as it continues to champion the voice and needs of Minnesota African heritage minorities. “We know there are over 400,000 people” [of African heritage] Bradshaw said. This figure accounts for seven percent of the state’s population, yet only six members of African heritage have a seat at the Minnesota house of representatives.