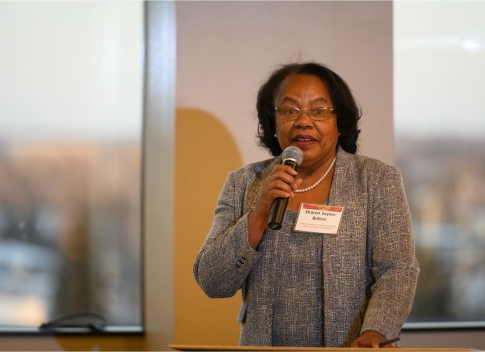 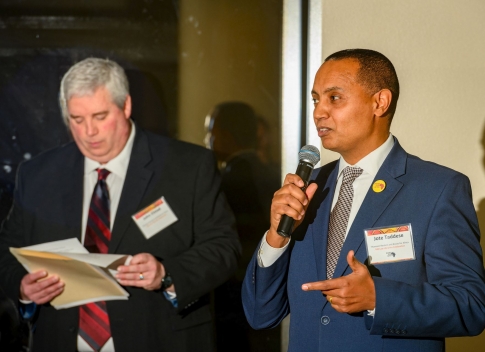 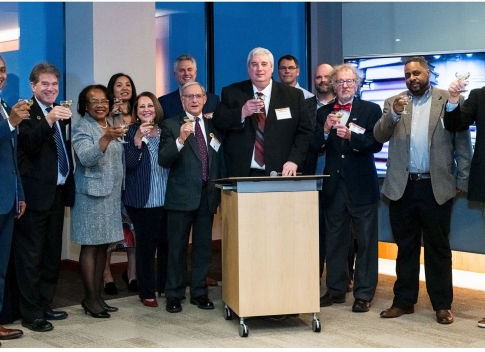 The Thomson Reuters and Books for Africa partnership was formalized in 2009 (which you can read about here).

Former Minneapolis mayor Sharon Sayles Belton and Thomson Reuters’ VP for government relations and strategic partnerships described the partnership as “unique and special” and “the most treasured” by her company, as it touches millions based on the impact the law books have had on the countries receiving them, a view shared by her counterpart John Elstad, the company’s head of legal editorial operations.

“Our goal in establishing this partnership were very simple but powerful,” Elstad told a gathering of supporters and dignitaries at Thomson Reuters headquarters assembled to mark the milestone. Among them were Justice Barry Anderson of the Minnesota Supreme Court and Judge Bridgid Dowdal of Minnesota’s Tenth Judicial District, as well as former Minnesota Secretary of State Mark Ritchie who now heads Global Minnesota.

Elstad said in partnering with Books for Africa, his company wanted to address the scarcity of law and human rights books in Africa, adding that “we wanted to do this so we can promote and support the establishment and preservation of the rule of law and independent judiciary in Africa.”

Congratulatory messages from former US Vice President Walter Mondale and Minnesota Attorney General Keith Ellison were read on their behalf by Elstad. Mondale is the co-chair of the Books for Africa Jack Mason Law and Democracy Initiative under which the law books by Thomson Reuters are donated. Mondale has co-chaired the initiative since its inception alongside former UN Secretary General, the late Kofi Annan until the latter’s passing in 2018.

Mondale in his message described  the rule of law as being fundamental to the development of a healthy democracy and good governance and added that the provision of law books to the receiving institutions “has had a transformational impact well beyond the classroom or courtroom as it has helped improve the rule of law and transformed the lives of millions of people.”

Minnesota Attorney General Keith Ellison in his message to mark the milestone recalled how during his days as a congressman serving in the foreign affairs committee, he would carry as many books from Books for Africa “as they would allow me on the flight” during official congressional trips to Africa.

Outgoing Books for Africa board president Jote Taddese thanked Thomson Reuters and especially its 6,000 employees for their spirit of Ubuntu, saying “when you place a book in the hands of an African child, you are not changing the life of that just person but the lives of others that you have not even met.”

Also speaking at the milestone celebration was Lane Ayres who gave a historical context of the founding of the law and democracy initiative. A retired lawyer, he directs the initiative on behalf of Books for Africa.

The 100th law library came about following a fortuitous conversation between the counselor to the Chief Justice of the US Supreme Court and Tom Leighton of Thomson Reuters. According to Leighton, the counselor had visited the Namibia Supreme Court and found that they did not have enough law books even though they had capable lawyers and good facilities. The Books for Africa Jack Mason Law and Democracy Initiative is named after a federal judge who was a board member at the Minnesota non-profit that has become the largest shipper of donated text books to Africa, make it all fitting that the 100th law library comes about following a conversation in the hallowed halls of the US Supreme Court.