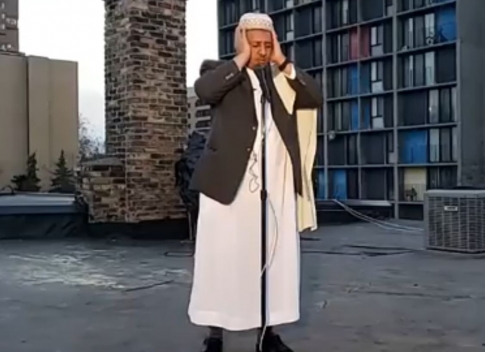 In a historic move last night marking the first day of Ramadan, the Adhan, the Muslim call to prayer rang out in the Minneapolis Cedar-Riverside neighborhood following the granting of a special permit by Mayor Jacob Frey on Tuesday.

Mayor Frey said the move is intended to help residents maintain safe physical distance during the holy month. Places of worship have been closed to worshipers as the COVID-19 pandemic rages. The mayor’s office in a release sent to Mshale said Frey facilitated the noise permit to honor the community’s request for the service, and the Council on American-Islamic Relations (CAIR) paid for the audio equipment to make the broadcast from Dar Al-Hijrah Mosque possible.

In keeping with the Muslim tradition, the Adhan will be sounded five times per day, beginning at sunrise and ending shortly after sunset.

“At a time when physical distancing requires we pray apart, it’s incumbent on leaders to create a sense of togetherness where we can,” said Frey. “Adhan provides solidarity and comfort – both of which are essential during a time of crisis. As our Muslim community prepares for Ramadan, we hope the broadcast will offer a measure of stability and reassure our entire city that we are all very much in this together.”

CAIR-Minnesota Executive Director Jaylani Hussein said the Adhan be especially meaningful to the many senior citizens in the Cedar Riverside neighborhood who have been isolated due to the pandemic.

“It will help them feel more connected to their community and mosque in this sacred month,” said Hussein.

Imam Sharif Mohamed of Dar Al-Hijrah Mosque praised the mayor’s move saying “In this time of fear and isolation, the Muslim communities of Minnesota benefit from a city that honors and loves all of its diversity.”

The speaker is located outside Dar Al-Hijrah Mosque at South Fifth Street and Cedar Avenue and will be played at volumes consistent with city regulations, reaching thousands of residents in Cedar-Riverside.

You can view and listen to last night’s historic broadcast at this link.