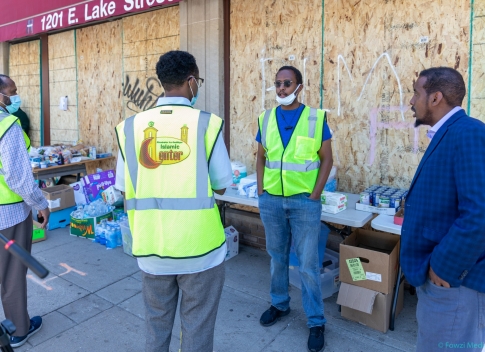 Places of worship were closed before the killing of George Floyd due to the coronavirus pandemic. However, the aftermath of the killing of Floyd, volunteering activities began again at Abubakar As-Saddique Islamic Center. The mosque, one of the largest and busiest in the Twin Cities is located in the epicenter of where the protests took place.

The mosque response focused not only on the community members but also on those who needed help, including those affected by COVID-19 and the closure caused by the civil unrest that hurt people financially.

Abubakar As-Saddique began food distribution immediately after South Minneapolis’ leading grocery stores were closed in response to the protests and violence afterward. Essentials were handed out daily by the volunteers of the mosque. These included food, hygiene products and other essential household items on E Lake Street and 12th Avenue.

Imam Mowlid Ali of Abubakar As-Saddique invited Mshale to witness the massive operation in action and emphasized that the need for help and volunteers in the community is substantial. He appreciated the fact that Somali small businesses contributed to the ongoing charity work organized by the mosque. “A special thanks to Dur-Dur Bakery, Dahabshil Halal Market, and Dream Land Trading for donating essential items to the food drive,” he said.

“I am grateful to AAIC and MYFS; they provided me valuable items, I am happy, and my children will be happy as well,” said Elizabeth Gomes, one of the many diverse people that came for food and other essentials for their families.”

Alejandro Rivera, a senior who does not drive, made his way by foot to receive the food and essentials. Although he could not speak in English, his gracious words in Spanish were well received by the volunteers.  Speaking in Spanish, he said, “Encontretodo lo que queria. Gracias amigos,” meaning, I found all I wanted. Thank you, friends.

The executive director of the Abubakar as-Siddique Islamic Center, Abdullahi Farah (Abdi Wajid), is leading this effort. The center is working with Muslim Youth and Family Services in the effort.

“Our hearts go out to the family of George Floyd and those in our community who continue to experience the systematic police brutality that often targets black men and other members of color communities.”

Abdi Wajid went on, “As a faith community, protecting the sanctity of life and human dignity are the core values of Islam. We, therefore, stand in solidarity with the weak, the destitute, and the vulnerable members of our society, and we call all Americans to come together against all forms and shapes of injustice. We demand reform to the legal system that continues to enable those who commit injustices”.

On the massive food and essentials drive, Abdallahi Adan, the head of MYFS publicly thanked the following organizations for support and logistics; Uadeeg, Isuroon, and Hikmah Cultural Center

“Without the help of these organizations, we would not have done this great job,” said Adan.

The center also expressed gratitude to University Rebuild, a theater-based group that has helped communities in the Twin Cities board up their properties to protect them. “University Rebuild helped us board up all doors and windows of the center to protect from vandalism,” Abdi Wajid said. “This is what Minnesota looks like — one community that supports each other and stands together during crises.”