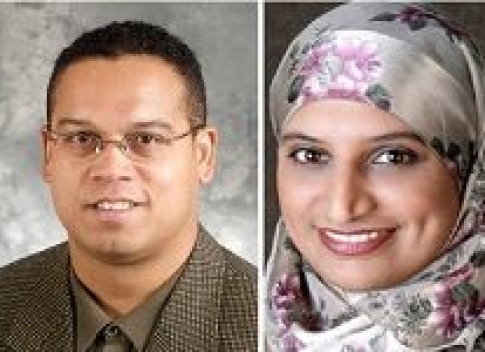 In America the followers of Islam, a faith under fire, abandoning the prevailing dual loyalty to native lands and America is the only path to repair their religion’s terrorism-entangled image.

At the center of an inner-struggle among Muslims is who deserves the first loyalty of the faithful: the native land, Islam or America?

During the third annual Muslim convention held in Minneapolis in mid-April, faith leaders say there’s no contradiction between being a patriotic American and being a good Muslim. The Minnesota chapter of Muslim American Society (MAS-MN), a Virginia-based nonprofit organization organized the event.

With more than 3,200 people in attendance, the three-day convention featured spiritual lectures, legal clinics, marriage counseling, sports and comedy activities, as well as not so-spiritual Islamic songs. Speakers included over 27 Muslim scholars from around the world and several Minnesota politicians. Chief among them was Democratic state Rep. Keith Ellison, the only Muslim in the state Legislature and a candidate for U.S. Congress.

Muslims vigorously support him because, if he wins, he will not only be the first Muslim elected to the Congress, but he will embody, they say, a desperately needed point of access to levers of power in America.

The ride to reach that goal, however, begins with “a love and loyalty for the new homeland – America,” says Asad Zaman, executive director of the Inver Grove Heights-based Tariq Ibn Ziyad academy, a K-6 charter school administered by MAS-MN.

Muslim leaders agree that, in order to repair Islam’s terrorism-entangled image in America – and in Minnesota, Muslims need to reach out beyond their faith, be more engaged in the larger community and indiscriminately contribute good deeds.

“Muslims should volunteer at non-Muslim charitable organizations such as Boy and Girl Scouts, food shelves and the Red Cross.” says Zaman who serves on the boards of the Minnesota Teaching and Minnesota News Council.

What deprives Muslims from social and political stake in America, Muslim leaders say, is that significant portions of the faithful have one leg in America and the other in the native land, thereby sacrificing much needed, unparalleled loyalty to America.

“Muslim Americans should abandon [such] dual loyalty,” said Abdul Wahid Sheikh-Osman, an Islamic Law scholar and an adjunct professor of law of the University of Minnesota. Instead, he says, Muslims should be stakeholders in the social and political process of America.

Muslims should challenge the system from within, not from outside, he says. He also suggests that Muslim annual conventions should invite non-Muslims to come and learn from Islam, especially families and friends of the American soldiers serving in Muslim countries including Iraq and Afghanistan.

“They need to feel and reflect the faith of the people in the countries where their sons and daughters are serving,” he said of the soldiers’ families. “That might give them a unique prospective of Islam.”

By reaching out to non-Muslim communities, Sheikh-Osman believes that Muslims are slowly, but steadily integrating to the American society, thereby reshaping their image.

But fear of the government and its sometimes overreaching hand became prevalent among Muslims since Sept.11 terrorists attacks. “Many Muslims believe that no Muslim can accomplish anything in America after Sept. 11, and that’s simply not true,” says Hassan Mohamoud, vice president of MAS-MN and lead organizer of the convention. “We need to defeat that perception.”

To persuade young Muslims of full participation, MAS-MN has been organizing Muslim Day at the state Capitol to coincide with the annual convention. Mohamoud, a Red Cross board member, says the goal is to raise issues and awareness among legislators and to expose young Muslims to the process of democracy and rule of law.

One young Muslim woman appears to have broken the fear of participation. Farheen Hakeem, a spunky 30-year old was a former Minneapolis mayoral candidate who made what’s tantamount to a political earthquake by garnering 14 percent of the primary votes last year. She’s now running for a Hennepin County Commissioner from the Green Party.

Hakeem, who also leads at least half a dozen Muslim Girl Scouts, says her candidacy alone makes a loud statement that Muslims are loyal Americans whose interests could be as patriotic and local as everyone else. She says she’s discontented with how Muslims become synonymous with terrorism. “It’s also a slap on the face of those who assume that Muslim women are unintelligent and extension of their husbands and fathers,” she said.

Born and raised in the Midwest, Hakeem testified before a House Committee recently on the contentious stadium bill. “They stopped chatting and gave me an undivided attention as I started talking,” she said of the committee members, “To them, a head-covered Muslim woman is the unlikely person to talk about stadium bill.”

Hakeem’s identity and seriousness were called into question during the last race by local media. A Pakistani descent, she was conjectured a “Black woman,” and was asked “Is Minneapolis ready for a Muslim woman mayor?” Others derided her garb and her hijab (head scarf.)

Despite all of that, Hakeem says she’s upbeat about her new candidacy and continues to “represent a challenge for local media,” until Islam is no longer seen as an un-American religion, unfit to hold a high-powered political position.

Friendship with other faiths

As the number of Muslims in Minnesota swells to around 150,000 with over 25 mosques and at least two full-time schools, so does their connection with other faith-based groups.

The new coalition is already jointly lobbying to oppose a bill in the state Legislature requiring local police to enforce immigration violations.

Muslims have also courted a separate friendship with Minnesota Council of Churches. The two sides established a unique taskforce working on strengthening the relationship between them. In a remarkable step, they agreed to celebrate Thanksgiving and Eid-Alfitr, Islam’s second biggest holiday, together every year in November.

Future of a faith under fire

Though leaders at the convention seemed poised to pronounce social and political integration while abandoning the degenerative dual loyalty as the two most pragmatic visions of Muslims in America, they face a challenge from the liberal-leaning culture here, which’s not so conducive to the generally reserved Islamic teachings. A midway path is sought as a workable alternative, Muslim leaders say.

“Support the good; stay away from the bad,” said Zaman, executive director of Tariq Ibn Ziyad school. The nice thing about this country, he says, is that no one will force you to do the bad things, most of the time.

“Clearly, some aspects of the cultural packages we hauled from our native countries are hindering our smooth integration into the American society as those aspects might no longer be relevant here,” says law professor Sheikh-Osman.