This Summer: Afrifest in Minneapolis

Julia N. Opoti - April 29, 2007 1
Update!
As Minnesota prepares itself for perhaps one of its largest multicultural fairs, Mshale had a chat with Nathan White who first had the dream of Afrifest. Afrifest is borne from the idea of the African Festival of Arts, a festival in Chicago that celebrates the African culture and its influence in different communities and aspects of life in Africa.

Liberia Consul General: Books Will Change The Lives of Many Liberians

Julia N. Opoti - April 26, 2007 0
Liberia’s Consul General, the Honorable Alexander P. Gbayee, was in St. Paul yesterday, as a guest speaker at an annual fundraising luncheon for Books for Africa (BFA). Since its inception, almost twenty years ago, BFA has grown to become the largest shipper of donated books to Africa.

At a time when Liberia is recovering from the effects of a long civil war that has stripped the country of all its physical resources, the role of BFA in providing books for this generation of Liberians cannot be more pivotal.

Susan Budig - April 26, 2007 0
Jack Brass Band, a seven-piece New Orleans-style crew playing outside in the Cedar's courtyard could be heard from the parking lot where I'd left my car.  Their familiar honky-tonk and Dixieland tunes cued my curiosity as I wondered how the Cedar Cultural Center's starring show, the Gangbé Brass Band from Benin, would mesh their homeland's music with such American fare.

Muzamba Sibajene - April 26, 2007 0
South African Consul General in Chicago, His Excellency Yusuf Omar, was in the Twin Cities yesterday to address the Minnesota Business Community and Africans in the Diaspora before attending an award ceremony later in the day. The Chicago Consulate covers the entire Midwest region of the United States.

The annual award ceremony recognizes members of the Minnesota community who have made tremendous impact on communities across the world in the three categories. The awards encompass not only Minnesotans, but also corporations and foreign-born Minnesotans who have endeavored to make positive in-roads in achieving global equity in areas as varied as global economy, human rights and empowering individuals. 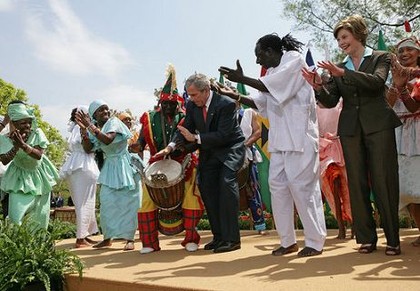 cheryl - April 26, 2007 0
WASHINGTON - In the United States, state and local government groups, universities, nongovernmental organizations and others helped raise awareness April 25 - Malaria Awareness Day - about the mosquito-borne disease that kills more than 1 million people each year. April 25 has been recognized since 2000 in some parts of the world as Africa Malaria Day.

At a White House "Challenge of Malaria in Africa" summit in December 2006, President Bush designated April 25, 2007, Malaria Awareness Day to highlight the U.S. commitment to global health and the fight against malaria

Huge Strides Made to Treat HIV in Sub-Saharan Region

Countries in sub-Saharan Africa have dramatically improved access to HIV and AIDS treatment for citizens over the past three years, a United Nations report has found.

The report entitled "Towards universal access - scaling up priority HIV and AIDS interventions in the health sector" is a joint effort from the World Health Organisation (WHO), the Joint UN Programme on HIV and AIDS (UNAIDS) and the UN Children's Fund (UNICEF).

dmpuga - April 12, 2007 0
WASHINGTON, DC - The East Africa Investment Conference on Investment has ended with a call to the private sector to deal with the employment challenge in the region.

Something from Nothing: The Other Face of African Art

Nelima Kerre - Mshale Staff Writer - April 12, 2007 0
For many, the term African art conjures up images of deftly carved wooden sculptures and masks with intricate patterns, heavily beaded royal attire or elegant, brightly colored textiles. At Minneapolis Gallery 13, through John Olympio's canvass paintings, we are introduced to a different side of African art. 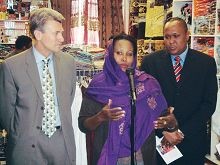 Julia N. Opoti - April 11, 2007 0
The City of Minneapolis and the African Development Center (ADC) have partnered to offer a new alternative financing program targeted at small businesses in the city. The program  addresses  Islam's prohibition on paying interest on loans. 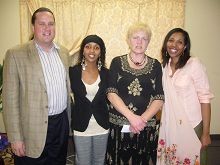 Julia N. Opoti - April 5, 2007 0
Nimco Ahmed was recently appointed as the policy aide for Robert Lillgren, the city councilor of the 6th Ward in Minneapolis.
12Page 1 of 2