Home Entertainment Brothers in Bamako: Habib Koité and Eric Bibb to perform at the... 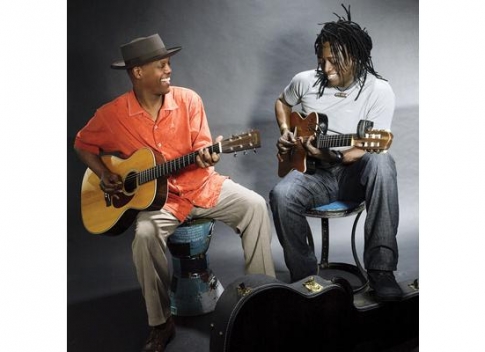 Eric Bibb strongly believes that anytime you collaborate with a musician from another culture, you’ll be rewarded with a new lens to look through when it comes to music.

“It’s very inspiring, you’re forever changed,” the American bluesman says of the process, something he recommends any artist undertake who’s interested in another culture.

“It definitely broadens one’s horizons,” he adds. Not only is there much to learn through collaboration, but there are similarities to be explored.

Bibb is speaking from personal experience, having gained powerful new insight into his craft through his recent ongoing collaboration with Malian singer-songwriter Habib Koité.

The duo met more than 10 years ago, the result of both being included on a 1999 Putumayo compilation album entitled Mali to Memphis: An African-American Odyssey.

Long interested in West African music, Bibb was familiar with Koité and was thrilled when they were asked to join forces for a Californian promotional tour.

“He’s an amazingly versatile musician who has collected and studied the many, many diverse musical traditions that the large country of Mali encompasses. . . .” says Bibb. “In his own writing and recordings, he’s done something really unusual, and that is he’s brought together many of these traditions into his band’s repertoire and his compositions.”

As they got to know one another, Bibb and Koité realized their compatibility as guitarists and singers. Sharing a mutual respect for one another as well as their musical traditions, they agreed to one day record an album.

“He’s amazingly inventive and has managed to synthesize all of his influences, which include, as I said, many Malian traditions, but he also studied classical guitar. He’s very aware of Western popular music, English rock, American blues and all that stuff. So in that way, we’re similar. We’ve had quite an eclectic musical background, but we’re also very grounded in specific traditions,” says Bibb.

The two musicians kept in touch over the years, running into one another around the world at various concerts.

“Finally, the opportunity came along and the next thing I knew I was in Bamako recording with him,” says Bibb, referring to Mali’s capital and Koité’s current home.

Their resulting work, Brothers in Bamako, is a unique world, folk and blues music fusion that draws on both their cultures and wide-ranging musical perspectives. The album was released last year and Bibb and Koité are in the midst of an international tour, having played a number of dates in Europe before landing in North America earlier this month.