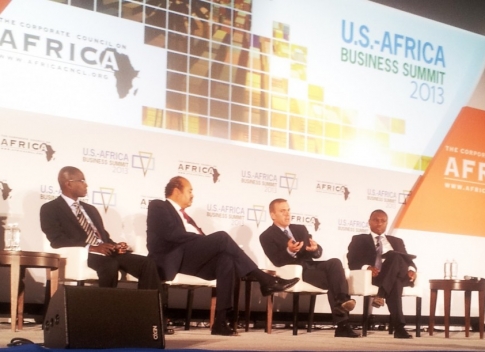 CHICAGO – African countries have made strides in producing educated people with the ability to run businesses and organizations but more needs to be done to equip them with the leadership skills needed to run major corporations and entities that have a global reach, participants at the 9th biennial of the U.S.-Africa Business Summit were told today in the second day of the summit that has attracted over 1,000 business and government leaders from the US and Africa.

Speaking to a capacity crowd in what turned out to be one of the most popular sessions of the conference, a panel which featured senior executives from Microsoft and Procter and Gamble said just obtaining the education and not the experience will not cut it in the new global economy.

Stanislav Vecera who leads Procter and Gambles operations in East and Southern Africa said the continent did not have a shortage of people with the academic qualifications to fill the jobs that are being created in Africa but that many do not have the required experience for many of the high skills needed for the expanding African economy.

“This is also a challenge to those companies operating in Africa to provide the opportunities that these (students) need to get the corporate experience”, Fred Humphries, Vice President of Government Affairs at Microsoft said.

Patrick Awuah, founder and president of Ashesi University, a private, non-profit institution in Ghana concurred saying that students in the continent need “broad perspectives” in order for Africa to have great leaders in business and government. “This is why”, he said “partnerships between Africa (and others) will have to make sense”.

The plenary session, aptly called “Shaping Leaders for Sustainable Growth” was offered in part so that the plenary participants can share their visions for growth in Africa and how they manage resources to prepare the human talent they lead. Vecera who has led Procter and Gamble operations in East and Southern Africa for the last two years said of all the regions he has worked, “Africans have the most energy and enthusiasm of all”, adding this is why it is important that they get pushed to the next level of leadership. He has previously worked in his home country of the Czech Republic, the United States, Hungary and Singapore.

Asked to share his thoughts on what a 25-year old African with no education can do to better himself, Simpiwe “Sim” Tshabalala, Co-CEO of Africa’s largest bank, Standard Bank, said it is never too late to better oneself. “If the opportunities can be provided, one can go back to school anytime”, he said. Tshabalala said with the expanding middle class in Africa, new opportunities should open up for all.

On how to overcome the leadership gap in business and government, those in position already will have to “lead by example” be willing to listen and rough it all “be humble”, according to Dr. Michael Maves, who was one of five speakers that formed the panel moderated by Zohra Zori of Global Management Challenge (GMC). Maves is a former CEO of the American Medical Association.