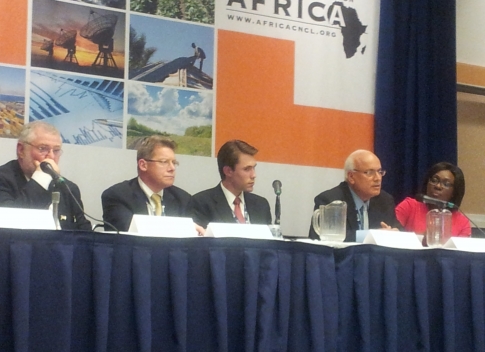 CHICAGO – An undercurrent of China’s influence in Africa has become a topic of intense conversation at the 9th biennial US-Africa business summit which kicked off formally this morning. The conference in the past has attracted the A-list of US companies operating in Africa and top African companies and this year is no exception. The conference has attracted over 1,000 government and business leaders from both the US and Africa. It is organized by the DC-based The Corporate Council on Africa (CCA), a non-profit that promotes business and investment between the United States and Africa.

China which has committed close to $75 billion on aid and development projects in the last ten years (according to aiddata.org) in its bid to secure what many perceive to be a strategy to solidify political and economic influence on the continent has become an obsession with the US business community which has been sounding the alarm recently. President Obama’s trip to four African countries early in the summer was seen as a “catch-up” effort.

Speaking at a panel on “Capacity Building” David Blumberg, Vice President and Director at Blumberg Capital Partners said the “American way” of doing business which focuses on social responsibility can act as a counter weight to the rapidly growing influence of china in Africa. “By deliberately transferring skills to the locals, we can win a lot of favor with them (locals)”, said Blumberg, which in turn can make doing business in Africa easier, he added. His company provides integrated food safety and security storage systems and is active in the agricultural sector in Africa. In July, its subsidiary, Blumberg Grain committed in cooperation with the government of Nigeria to a $250 million investment program in the Nigerian agriculture sector with the first phase of the project creating 1,000 jobs. Mr. Blumberg seemed to be drawing a contrast to the Chinese who bring their own labor including for the most menial of tasks thus denying employment opportunities for local Africans.

At most of the sessions at the summit, china invariably comes up. At a “Doing business in South Africa” session, South Africa’s ambassador to the United States, Ebrahim Rasool, lamented how lean EXIM Bank’s portfolio in Africa is. EXIM is the lending arm of the US government that provides loans to US companies doing business overseas.”United States can’t afford to pull back from Africa at this moment of its greatest potential”, Rasool said as he responded to a questioner regarding the anemic direct investments coming from US companies into Africa.

This is the first time the summit is being held outside of Washington, DC when held in the United States as it has been hosted in South Africa previously. Stephen Hayes, the CCA President and CEO said Illinois US Senator Dick Durbin championed the idea to host the conference in Chicago. “(Chicago) enables CCA to connect with hundreds of Midwestern companies that are ready for new markets, and are especially strong in the fields that favor American investment”, he said.