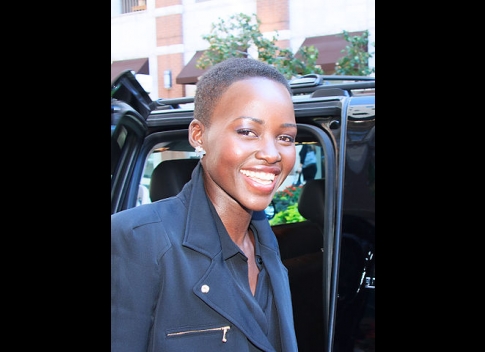 Lupita Nyong’o is preparing herself for normalcy. After the frenzy that’s followed her gripping performance in “12 Years a Slave,” she wants to be ready for life back home in New York.

“I try to keep my regimen — rest, water, eat well, workout — so that when this is all over, I don’t experience a total hangover,” she says, taking a bite of scrambled eggs in a recent interview at a Beverly Hills cafe.

She hasn’t yet accepted that her life may never be the same. “I have a very ostrich mentality,” she says. “I feel like I have my head in the sand so no one can see me.”

When she received the call from McQueen saying she had landed the role, “I was so elated,” she recalls. “But then I immediately panicked. I was so scared.”

No wonder; this would be her first major role after attending the Yale School of Drama. Yet shooting the film gave her the confidence she needed coming out of school. “It was an amazing feeling,” she says.

Now, with all eyes on what she’ll do next, the actress refuses to stress about securing another role that’s equally as celebrated.

“The bar has been set very high externally and internally,” she says. “But I don’t want to feed into that pressure of expectation. This film was so fulfilling and artistic. I’ve tasted that and I obviously want to experience that kind of creative fulfillment again, but I also know that I can’t replicate that. I want a varied acting experience and that may include some failure and that’s healthy.”

Actually, Nyong’o’s next film is already in the can and ready for release on Feb. 28: She plays a flight attendant opposite Liam Neeson in the action-thriller “Non-Stop.” ”It was what I needed to do,” she says. “It was the perfect antidote to ’12 Years a Slave.’ It was a different genre with different demands. It was very technical and fun.”

Growing up in Kenya, Nyong’o says her parents encouraged her and her five siblings to “find out what we were called on this earth to do and then do it to excellence.”

Before former Kenya president Daniel Arap Moi allowed multi-party politics in 1991, Nyong’o’ father, Peter Anyang’ Nyong’o, was an advocate for democratic reform, opposing Kenya’s autocratic regime. Then a political science teacher, Nyong’o’s father relocated his family to Mexico City for their safety. It was there that Nyong’o was born, yet her family returned to Kenya before she was a year old.

Nyong’o says her parents have been supportive of her Hollywood success but have also taken the excitement in stride. “It’s nice to have parents like that because they’re thrilled,” she says. “But they’re not shaken by it.”

(Nyong’o’s father is now a Kisumu County senator and her mother, Dorothy Nyong’o, is the managing director of the Africa Cancer Foundation.)

With the Academy Awards less than two weeks away, the 30-year-old actress says she wants to continue to savor every moment, even the overwhelming ones.

“The Hollywood Film Awards were really stressful,” she remembers of the October ceremony, where she shared the spotlight with the likes of Julia Roberts and Matthew McConaughey. “It was the biggest press line I’d ever seen. It was difficult to orient myself, but there are familiar faces now, so it becomes less daunting.”

Not only blessed with significant acting ability, Nyong’o’s striking beauty and bold fashion choices have made her one of the most talked-about celebs on the red carpet.

From the turquoise Gucci column gown she wore to the Screen Actors Guild Awards to the emerald green Christian Dior dress she chose for the British Academy of Film and Television Arts awards last weekend, she’s what “12 Years a Slave” screenwriter John Ridley calls “undeniably poised and graceful.”

Never the girl who thumbed through Vogue (now she appears in the magazine as the face of fashion house Miu Miu), Nyong’o began buying fashion magazines in preparation for all of the formal events she expected to attend following the success of “12 Years.”

“I was like, ‘OK, I have to research,'” she recalls with a giggle. But letting herself “dress large” has been scary, she admits. Referencing the scarlet Ralph Lauren dress she wore to the Golden Globes, she adds, “It had a cape! That was exhilarating.”

Despite her tendency to make fashion statements in stunning ensembles, she doesn’t feel pressure to always deliver a talked-about look. And the same goes for her feelings about Oscar night.

“I feel privileged that people are looking up to me and perhaps a dream will be born because of my presence,” she says. “But my responsibility is to just keep on pursuing my dreams and goals and the admiration will take care of itself.”

Notes Whoopi Goldberg, who Nyong’o cites as an inspiration after watching her in “The Color Purple” as a child: “Hollywood is a very strange place. Lupita has to be really glad people want her autograph and know that she has the right to say ‘Not right now.’ But no one can limit her conversation to race because she’s better than that. She’s a great visual for why dreaming is OK.”