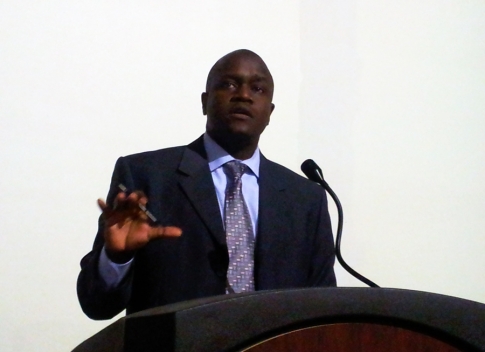 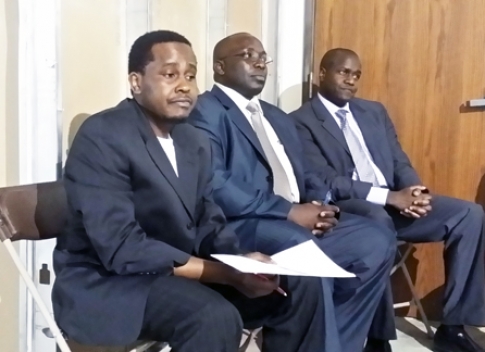 Geoffrey Gichana was elected Sunday as president of Mwanyagetinge which pulls together members of the Gusii community of Kenyans in Minnesota. The Gusii community is estimated (by Mshale) to represent more than 60% of the over 10,000 Kenyan immigrants in the state. They hail mostly from the populous Kisii and Nyamira counties in western Kenya.

Gichana is an IT worker and a Metropolitan State University alumnus with a bachelor and master’s degrees in Management Information Systems from the institution. He ran unopposed and was elected by a unanimous voice vote by members present. Gichana, 34, now leads the oldest organized group of Kenyans in the state. The organization formed in the mid-80s as Kenyans trickled into the state before swelling to become the fourth largest among the African immigrants in Minnesota.

The post of president attracted two candidates but under stringent new rules adopted in a new constitution last year, one needs a minimum of a bachelor’s degree to run. Tom Bichanga, chairman of the elections commission overseeing the vetting of candidates and the election told Mshale the other candidate did not meet the criteria spelled out in the new constitution, thus resulting in his commission presenting just one name to the membership.

“We are going to move Mwanyagetinge towards a different direction,” Gichana said in a brief acceptance speech. He said his team plans to usher in a new era of close collaborations with other community stakeholders such as businesses and churches.

Admitting a contentious road ahead regarding the Benevolent Fund, he said “Our proposal is to delegate that to the specific constituent groups because that portion can be managed well at that level.” The fund assists participating bereaved members with financial support in times of death of a family member. His proposal, if adopted, will result in the divvying up of the management of the fund along lines that resemble the existing parliamentary boundaries back in the Kisii and Nyamira counties, where most of the members hail from or trace their family tree.

Also elected Sunday was financial services veteran, Wycliff Chakua, a Risk Analyst at Wells Fargo Bank. He takes over as vice-president and he too like Mr. Gichana was elected unopposed. The elections commission said no other person offered themselves for the position. Chakua, 35, was the treasurer in the outgoing Japheth Kimaiga administration and is also the incoming Midwest region Chapter Head for Africa 2.0, a Pan-African Civil Society organization that consists of young and emerging leaders from Africa and the Diaspora.

Chakua graduated from Devry University with a Business Technical Management degree and is currently working on his MBA at Keller School of Management.

“The vision we have together with the president will bring back the fire to the organization,” Chakua thundered in brief remarks to members following his election. He said Mwanyagetinge has been relegated to one which comes to prominence only when someone dies and that should not be the case, eliciting nods of approval from members. He added “(Mwanyagetinge) should be the main organization of Kenyans in the state and we are going to claim our rightful place.” The vision, he said would be to move the organization from a welfare organization to a “community resource center that will identify opportunities for its members,” he said. He added the vision the team has will be achieved through training, job placements, collaborations and wealth creation.

Hamline University business student, Collins Orenge, 28, assumes the new role of Public Relations Officer. His is the only elected position that does not require a minimum of a bachelor’s degree. The candidate only needs to have “good organizational skills” and “good people and communication skills,” according to the constitution.

A self declared “self-taught entrepreneur”, Orenge, in addition to being a student runs Lulu Creations, a web design firm he founded.

“If we do not change we are going to be extinct,” Orenge told members. He urged them to contribute financially to the organization over and above their membership dues as “the current state of affairs is very bad”.

Two key positions in the organization had no takers according to the elections commission. After a lengthy discussion at the lack of interest in the two positions, members lamented the state of affairs of the organization with some calling for a new recruitment drive to register new members to bolster its deteriorating finances.

“This is indicative of where we are, not enough registered members so we can have money to function properly,” one member said.

Chakua and Orenge who were Treasurer and Secretary respectively in the outgoing administration will oversee those functions on an interim basis in addition to their new roles while the elections commission seeks to fill them, members instructed.

At the Sunday meeting, three members volunteered themselves for the two vacant posts. They will be vetted by the commission and voting will take place at a later date.

Officers serve a two year term and can be a re-elected for one more additional term.