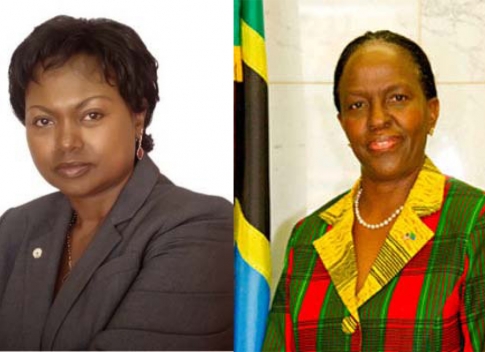 Registration for two key Africa focused events in May in the Twin Cities is now open. Ambassador Mathilde Mukantabana of Rwanda and Ambassador Liberata Mulamula of Tanzania will headline two separate events organized by the Minnesota International Center and Books for Africa in the same week.

Ambassador Mukantabana will be in Minneapolis on May 5 to speak at the Minneapolis campus of the University of St. Thomas on the 20th anniversary of the Rwanda genocide. UN Secretary General Ban ki-Moon in February launched ‘Kwibuka 20‘, a series of events commemorating the tragedy, and urged the international community to do more to fully internalize and implement the lessons learned from the killings of 800,000 people in 1994.

The remembrance event at St. Thomas is being organized by the Minnesota International Center (MIC), one of the country’s largest World Affairs Council.

The ‘Kwibuka 20’ event is free but online registration is required to secure a spot. The registration link is at the bottom of this story.

Ambassador Liberata Mulamula will be the keynote speaker at the annual Books for Africa fundraising luncheon. The luncheon, tailored for working folk during the lunch hour, is the main fundraising event the organization holds during the year.

Books for Africa has grown to become the largest shipper of donated school textbooks to Africa.

Among Books for Africa’s marquee programs, in addition to the well established shipment of books to primary and secondary schools in Africa, is the Law and Democracy Initiative that former Un Secretary General Kofi Annan and former US Vice President Walter Mondale co-chair. The program, through a sponsorship from Thomson Reuters, ships new law books to African law schools.

The luncheon is free to attend (after a free registration) but it is a fundraiser meaning you will be asked to financially support the work Books for Africa does.

Registration details are at the bottom of this story.

Ambassador Mulamula after the Books for Africa luncheon will head to Thomson Reuters headquarters in Eagan where she will be the featured speaker at an East Africa Business forum organized by the State of Minnesota’s Trade Office (DEED). Panelists at the forum alongside the ambassador will include IT Consultant Fred Nabeta, Asratie Teferra of Zebra Consulting and Tom Gitaa of Mshale; all are US based East Africans. Speakers from Twin Cities Fortune 500 and small companies will be featured.

The forum is part of the Trade Office’s Africa Series. Registration for the East Africa Business Forum is $10.