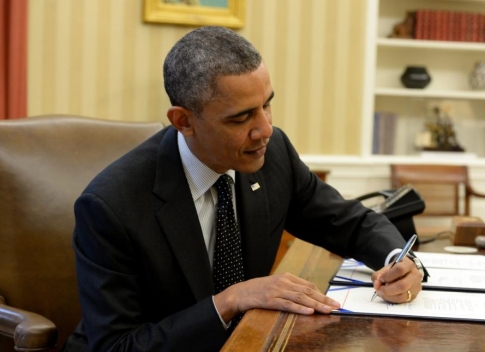 President Barack Obama has finally delivered the eagerly awaited Executive Order and although masses were excited about the prospects of the Order solving their Immigration dilemma, Africans in the United States have experienced mixed reactions. Some are excited while others are very disappointed. Many believe that the President has gone way below their expectations and the struggle continues. Many felt that the Order should not have restricted the benefits to only those with sons and daughters who are citizens or legal permanent residents but should have gone further and cover all those who have been here for the said period, have been paying taxes and have no criminal record. Credit be given where it’s due though. The Order has come with various aspects which many should applaud.

The Order was heavily hinged on ‘Family Unity’. This is what led President Reagan and President George Bush Senior to act during their reign. President Obama has followed suit. This was a bold move which analysts believe was bolstered by the shellacking of the Democrats by Republicans during the mid-term elections. The President ordered Executive Action on the following areas;

It is important for one to first understand what an Executive Order is. An executive order is issued under statutory and or constitutional powers by the president to manage internal operations of federal agencies. Executive Orders have the full effect and the force of the law. Executive orders are subject to judicial review and can be struck down if they are found to be unconstitutional. However up until the Judiciary makes that determination, the executive order remains valid law. Based on the details of the Presidents Executive Order, the legal fraternity is of the opinion that the Order can withstand Judicial Review as the President ensured that he issued the Order within the bounds of the law.

The areas that are so dear to most of the African population in the United States lie in Deferred Action, the ability to travel home with Advance parole and the much dreaded ICE-DETAINERS upon arrest by State and Local authorities. These areas have been covered by the Executive Order and numerous people will benefit as a result. There is a lot to celebrate at the moment. Besides the fact that many will now be able to come out of the dark, the ability to pay for citizenship application with a credit card will be a great relief to many as well as partial waiver of citizenship application fees upon consideration.

Extension of Deferred Action to parents of U.S Citizens and Legal Permanent Residents is a welcome relief. A lot of adults who came into the United States and were blessed with U.S citizen children have been waiting for their children to attain the age of 21 years to be eligible to petition for them. It is sad that many would be ineligible to travel out of the country for over two decades. The order as outlined in the Department of Homeland Memorandum dated 11/20/2014 is a great relief and solution to these parents. Those adults who were in the United States before January 1, 2010 and have either a United States citizen or Legal Permanent Resident child will be eligible to apply for Deferred Action regardless of the age of the child. There is no longer a need to wait for the child to attain the age of 21 years.

Any individual who is present in the United States without authorization can be removed (deported) when the Department of Homeland Security requests through the Department of Justice to do so. This is how undocumented aliens and illegal aliens find themselves in immigration courts for deportation.  Deferred Action is a form of Prosecutorial Discretion by which the Secretary of Homeland Security deprioritizes an individual’s case for humanitarian reasons, administrative convenience or in the interest of the department’s overall enforcement mission. The deferred Action does not confer any legal status but rather allows one to legally live in the United States. Just the option to legally live in the United States is liberating for so many people!

Simply put, the government is saying, we know you are here without authorization and you currently don’t have an available avenue to become a legal permanent resident or any other non-immigrant status, we understand you, and because you have some factors that are favorable, we will allow you to peacefully stay in the United States legally for a certain period of time (currently three years) and have the ability to work and seek permission to travel outside United States and come back without any problem. Hopefully, at the end of the three years, you might have got another avenue and if not, as long as you are still eligible, we shall consider again and extend your period of legal stay. To qualify, the Order as captured in the DHS Memo provides for Deferred Action to adults who;

b)      Have continuously resided in the United States since before January 1, 2010

f)       Present no other factors, that in the exercise of discretion makes the grant of Deferred Action inappropriate

The President mentioned among other requirements, the need to pay taxes. The Department of Homeland Security Memo however did not address the issue of taxes but this can be captured as a favorable factor that would make the grant of Deferred Action appropriate. As expected with any Executive Order, we await further guidelines which will soon be issued by USCIS. With the grant of Deferred Action, the individual will be eligible for a ‘Work Permit’ whose application shall be done together with the Deferred Action. This Deferred Action will be valid for three years and so shall the work authorization.

Ability to travel outside the United States

The guidelines to be released will also outline how one can obtain the necessary documents in the form of Parole, to enable them travel outside the United States and return without encountering any problem. This is exciting for many who have not seen their relatives back home for years and honestly did not have any hope of being able to travel home in the near future.

Duration of the Deferred Action

The Department of Homeland in its memo was directed to effect this deferred action for a period of three years.

“The period for which DACA and the accompanying employment authorization is granted will be extended to three-year increments, rather than the current two-year increments. This change shall apply to all first-time applications as well as all applications for renewal effective November 24, 2014. Beginning on that date, USCIS should issue all work authorization documents valid for three years, including to those individuals who have applied and are awaiting two-year work authorization documents based on the renewal of their DACA grants.”

When to File the Application

The USCIS will provide guidelines on the application process and time. The Order was very specific with issuing USCIS with a time frame and deadline by which USCIS must have the application process open. Immigrants should act immediately and contact a reliable immigration attorney to ensure that at the time of the actual application, all preliminary matters have been attended to and that they are at the front of the line. It is critical to ensure that potential beneficiaries of the Order are not barred by things such as lack of proper documentation and criminal background clearance issues.

For those who entered United States before January 1, 2010 while under the age of 16 years, the memo provides;

“USCIS should begin accepting applications under the new criteria from applicants no later than ninety (90) days from the date of this announcement.”

“For those qualifying under parents’ category, the Order provides “USCIS should begin accepting applications from eligible applicants no later than one hundred and eighty (180) days after the date of this announcement.”

What is likely to happen after 3 years?

The language of the Order anticipates that barring changes in the law, the Deferred Action will be extended after three years.

“The period for which DACA and the accompanying employment authorization is granted will be extended to three-year increments, rather than the current two-year increments.”

The current work authorization and biometrics fee is $465.

Once the final application process is in place, this fee may increase to cover the advance parole application to enable one to travel temporarily out of the United States. This may call for an additional $380, but we are yet to know.

What if I Was Deported (Have a final removal order)

It is exciting that an individual either in removal proceedings or already has a final removal order will be eligible for deferred action.

“As with DACA, the above criteria are to be considered for all individuals encountered by U.S. Immigration and Customs Enforcement (ICE), U.S. Customs and Border Protection (CBP), or USCIS, whether or not the individual is already in removal proceedings or subject to a final order of removal.”

The Wrong Help Can Hurt

Matters involving one’s liberty and the ability to live and legally work in the United States is so dear to each and every non- United States citizen. That being the case, the Executive Order is very crucial to many. It is therefore advisable that one should consult an experienced, competent and knowledgeable immigration attorney. Professionalism on the part of the immigration attorney is key to allow those who will benefit from the act to smoothly navigate the process. Even the smallest error could be a greater source of agony to than that one suffered while they remained in the dark.