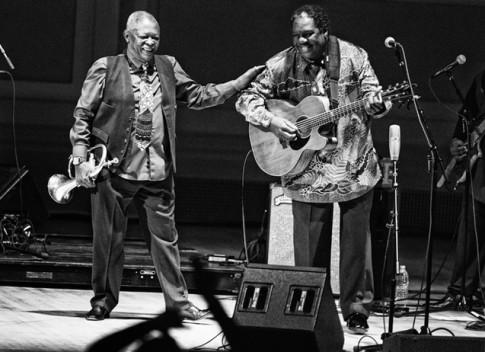 It goes without saying that Hugh Masekela and Vusi Mahlasela delivered an outstanding performance as part of the Ordway’s celebration of its new concert hall, dubbed ‘Rock the Ordway’. We would expect nothing less from the two individually, but as a duo they are quite simply exhilarating; complementing each other in that way great partnerships do. But even before Mahlasela had uttered a single tone, or Masekela had given breath to his trumpet, the show had began much earlier in a stroll through Rice Park and into the renovated Ordway Center for the Performing Arts.

St. Paul does not get all the love it should, and that’s not because it’s lacking but because it’s got a rowdier bigger sister who hoards all the attention- Minneapolis. So whenever I find myself in downtown St. Paul, it’s a pleasant remembrance of just how charming the city is. The Ordway’s guest entrance sits facing Rice Park, which is surrounded on all four sides by old world architectural charm. The real treat though is the thousands of lights that drape the trees in the winter and are a beautiful sight both from outside and inside the large glass windows occupying the front wall of the Ordway. As we walked into the foyer, there was buzzing energy and plenty of attendants on hand, as people milled around for the two scheduled performances for the night.

With tickets on the second floor of the brand new hall, we had an impressive view of the stage and its signature rolling wood ceiling. The ceiling designed to amplify sound was complemented by upholstered audience seats, and unassuming white walls, giving the hall a light, clean, and open feel. I can also happily report that there indeed is no bad seat to be found. With each seat no more than 100ft from the main stage, and an acoustician employed in the designing process, the space was created with utmost consideration for the guest experience.

As the crowd settled in for the show, Mahlasela appeared on stage with his guitar, opening the show with a song on the beauty of Africa’s land, sang in Zulu and Xhosa. He was soon joined on stage by Masekela, who was warmly received by the crowd, as the bigger of the two stars. The rest of the band poured out to take their positions- composed of all Africans and an impressionable mastery of their instruments that sounded as natural as Mahlasela and Masekela’s talents. The two artists dedicated the show to the “grandfathers of humanity who taught forgiveness” such as Desmond Tutu, Nelson Mandela and Mahatma Ghandi, as they talked about the 20 + years since the end of apartheid.

Setting the tone for most of the night, they joked about their 20 Years of Freedom tour, which Masekela said felt more like “The Great Arctic Tour,” drawing laughter from the audience. Masekela and Mahlasela then embarked on a musical and storytelling journey through the depths of apartheid, and its political and creative oppression. In song and impassioned messages they spoke of the freedom fighters and ordinary citizens who had protested aparthaid, the heroes and dreams that were realized, and the continued commitment to ensure that “never again” would South Africa have a society in which others were oppressed by one group.

In song and instrument, Masekela and Mahlasela were dedicated performers, covering their hits as well as songs that had been part of the anti-apartheid struggle, and that spoke to issues that still faced Africans. Speaking to the dangers the mining industry still poses in “Stimela” (“Coal Train”), Masekela spoke in English about the trains carrying African laborers to backbreaking jobs in the mines. As the song drew to an end, Masekela who had mimicked the movement of a train with his body, released screeching like brakes and train whistles that signaled the trains movment and left chills on my arms.

He played his signature fluegelhorn and various instruments throughout the performance, while Mahlasela alternated between his guitar and his hearty voice that carried into every corner of the room. Mahlasela opened his song, “Sing Now Africa” with a reflection on Africa’s fate being decided by people outside of Africa and invited the audience to consider whether Africa should receive aid. His conclusion, “We deserve that aid because Africa has been given aid to others for centuries.” The song, telling Africans to rise up had lyrics in Kiswahili and proved why Mahlasela had earned the name “The Voice.”

The show was filled with jabbing phrases, jokes, and singalongs, and grooves that made you want to move. On stage, the two artists were not shy about moving to the music. In synchronized and solo dances, they entertained the crowd, with Masekela inspiring great whoops as he repeatedly twisted himself on stage. All around the hall, solo and duo dancers in the audience who could not resist the urge to move either, could be spotted. Sensing the energy in the room the two artists invited the audience to dance with them, moving everyone to their feet for the last 3 songs of the night. The mixed crowd gladly moved their bodies to the beat of the music, working up a sweat and demanding an encore when the artists left the stage, which they gladly provided.

The performance and the Ordway delivered beyond expectations and for this young African, it felt like an evening with a distant uncle and a grandfather who were in town visiting. From the song Ubuntu, this lyric sums it up, “I might be walking in a city called London, but the dust on my feet and the rhythm of my boots say Africa.”