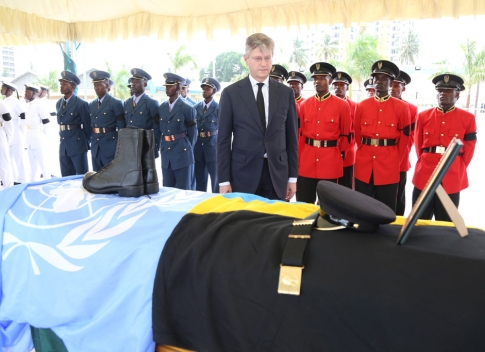 Despite a particularly deadly year for United Nations peacekeepers – with more than 60 ‘blue helmets’ killed in hostile acts – the Organization in 2017 completed its peacekeeping objectives in Côte d’Ivoire, refocused its work in Haiti and will soon complete its mandate in Liberia.

“We do protect civilians every day. We do save lives every day. We often do it under very difficult and stressful circumstances,” Under-Secretary-General for Peacekeeping Operations Jean-Pierre Lacroix said in a recent interview with UN News.

He added that “many lives were saved” because of peacekeepers’ actions this year in the Central African Republic, the Democratic Republic of the Congo, Mali, South Sudan and other places.

“I think it’s more than warranted to pay tribute to them and their achievements,” Mr. Lacroix said. “But certainly we have to work hard to overcome the challenges we are facing.”

One of the challenges facing UN peacekeepers, as they operate in increasingly complex and dangerous areas, is the need for better training and equipment, particularly when it comes to intelligence gathering and enhancing situational awareness.

This includes the use of modern technologies, such as unmanned aerial services, radars and tethered balloons.

The head of the UN Department of Field Support, Atul Khare, said the UN is also looking to borrow or purchase more equipment related to security reinforcements, accommodations, vehicles and communications tools, among others.

In Mali, for example, one out of four military hospitals is without staff or equipment, and in the Central African Republic, one in three, he said.

The needs also extend to gaps in working closely with local communities, which means that in some areas more peacekeepers are needed who speak French.

“We must do even more on the side of prevention and risk mitigation when seeking to protect our colleagues. Providing for the safety and security of deployed personnel in volatile environments is an absolute necessity,” Mr. Khare told UN News.

One of the main challenges in peacekeeping operations has been grappling with allegations of sexual exploitation and abuse by UN peacekeepers.

Earlier this year, Secretary-General António Guterres unveiled his strategy for eradicating the scourge, and appointed Jane Connors as the first Victims’ Rights Advocate.

“It is about dignity for the victims, compassion, a real feeling of empathy, a feeling that they are not forgotten,” Ms. Connors said in early December. “That their hurt, their pain is acknowledged, and we do as much as we possibly can do to make their situation better.”

Ms. Connors made the comments during a visit to South Sudan, where four of last year’s 103 allegations were filed. This year, the UN recorded 54 allegations – roughly half the number.

“This is a result of the many robust efforts put in place to train our personnel, raise awareness among communities on the risks associated with SEA [sexual exploitation and abuse], promote and enforce the zero-tolerance policy and partner with Member States,” said Mr. Khare.

The new UN strategy to prevent sexual exploitation and abuse puts more pressure on governments to investigate and prosecute wrong-doing. In addition, 17 countries volunteered some $1.8 million for a trust fund to aid victims get medical, psycho-social, legal or socio-economic support.

“We can see that information about allegations are coming more with less obstacle than before,” Mr. Lacroix said. “At the same time, we need to do more to fully implement the policy and it has to have strong awareness at every level.”

UN peacekeeping is also managing its impact in another way within the countries that host its operations – by preserving natural resources and not damaging the environment during the physical deployments.

“’Do no harm’ must include both communities and the resources upon which they depend: water, land, cultural heritage,” Mr. Khare said.

“We are constantly looking into keeping our own house in order, and leave the place better than we found it,” said Mr. Khare.

If the year 2017 brought ambitious reform, then 2018 must be the year that these reforms are implemented, Mr. Lacroix said.

He noted that this will be particularly important in the field, where colleagues must be informed and empowered to act.

Mr. Khare echoed the idea that reforms are ongoing, noting that the goal is to “ensure that we are stronger in prevention, more agile in mediation, and more nimble, efficient and cost-effective in our operations.”

He pointed to improved efficiency and effectiveness of peacekeeping, including also by strengthening engagement with Member States and regional organizations to better serve the most vulnerable people around the world.