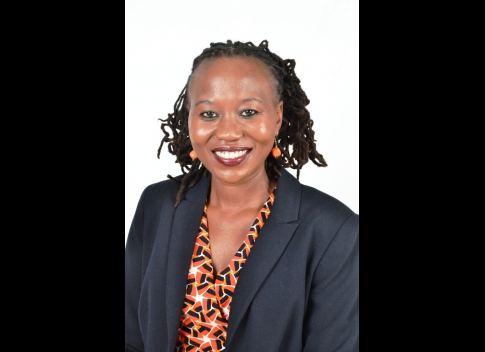 BROOKLYN CENTER, Minnesota – Dr. Roselyn Akombe, chief of policy, guidance and learning at the department of political affairs, United Nations New York, was the featured keynote speakers at the 15th annual Minnesota Kenya International Development Association (MKIDA) annual graduation gala on Saturday . Hers is a debated name in many Kenyan homes. Her controversial exit from Kenyan during Kenya’s 2017 presidential elections remains a talking point in Kenyan political debates to the present day.

Dr. Akombe made her grand entrance into the MKIDA 2018 graduation gala a few minutes past six. The attendees were already settled by five thirty and catching up in low tones. As I sneaked a quick look through the conference room the demographics were diverse-from children, teenagers, men, women to the elderly. Simply put, the venue was parked to capacity with a mix of Kenyan-Minnesotans from diverse backgrounds.

The attendees like me anticipated to get some answers on the contentious 2017 presidential elections from Dr. Akombe. After the MKIDA chairman gave a standing ovation to the 2018 graduates and their parents, it was finally time for Dr. Roselyn Akombe to address the congregants. Walked to stage by her son and dancing to the theme song “We are a chosen generation” by Sinach, she was welcomed by the MKIDA Chairman Kennedy Gisemba.

Appreciating MKIDA, the graduates, parents and all the other attendees, Akombe’s opening remarks resonated with many Kenyans in the audience. She recognized the Kenyan-American struggles both back in Kenya and in the United States. While she made her intention to focus on the theme of the day, It worth to note that she consistently made reference to her controversial exit and her experiences in the murky waters of Kenyan politics. Her persistent assertion to the United States as the land of freedom was clearly an indication that she did not feel or hold similar feelings to her country of birth, Kenya.

With great optimism, Akombe talked about her humble upbringing back in Kenya , and a fathers power in inspiring her children to greater heights of integrity. She made constant references to her experiences as a young girl and how in many ways her father’s firmness inspired her to choose integrity in many situations in her later life. She attributed her early struggles and work ethic in the United States as a significant factor in her ability to remain contained in ensuring she delivered her responsibilities including the responsibilities she held as an IEBC commissioner.

She encouraged Minnesota Kenyans to remain grounded even under extreme pressure, to ensure they always deliver on their obligations and responsibilities even if that requires them to be uncomfortable at times, to hold the hands of their brothers and sisters and walk with them in their American struggle, to never to take that which never belongs to them. Albeit, sometimes like herself one may face intimidation from powerful forces, it was critical to hold our moral standards to high levels, never taking the seemingly easier options out. She upheld that through all experiences good prevails over evil.

Akombe went on to encourage the Minnesota Kenyans who had chosen to disrupt the systems in business such as a group of young Minnesotans known as Hyrabox who were transforming Africa by distributing internet in rural areas, or Benard Muko whom despite being an immigrant had chosen to run for office of mayor in Brooklyn Park and accomplished academicians such as Justus Onsogo who had acquired their doctorate in anesthetics.

In her closing remarks Dr. Akombe echoed Mark Twain’s quote that people were more likely to be disappointed by the things they never did than those they did and as such encouraged everyone to dare and venture into the unknown waters, to explore and discover.

Scanning through the room, I am not sure whether the attendees like myself got he answers they anticipated to get on the contentious 2017 presidential elections. But I would say, Dr. Roselyne Akombe’s address was outstanding and life changing take home lessons to all of us and The wider Kenyan community.

Sylvia Nyambeki is a skilled writer; previously championing articles such as Marketing Tips for Kenyan C.E.O’s and Is Marketing an un-necessary luxury for Small Kenyan businesses? She is a practicing educationalist who has taught at The Technical University of Kenya and St. Paul’s University in Nairobi, Kenya. She has also served as a mentor and mentor coordinator for young girls with The Global give back circle. She is currently pursuing her doctorate in International Economics and academic research in corruption and its implications on Intra-regional trade.