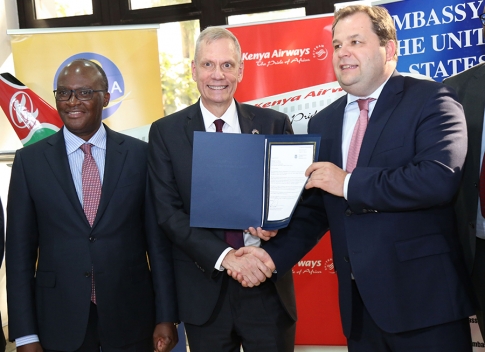 The much-anticipated debut of Kenya Airways’ direct flights from Nairobi to New York on October 28 got a step closer to reality when the airline received the Last Point of Departure (LPD) confirmation letter from the Transport Security Administration (TSA). Receipt of the letter confirms that Nairobi’s Jomo Kenyatta International meets TSA security standards, clearing the way for the historic flight.

US Ambassador, Robert Godec presented the TSA letter to Kenya Airways Group Managing Director and CEO, Sebastian Mikosz at a ceremony held at the airline’s headquarters in Nairobi yesterday. The letter comes barely two weeks after president trump met at the White House with Kenya’s president Uhuru Kenyatta to discuss trade and security. Only the third African president trump has hosted at the White House since taking office.

As of 2017, TSA listed 280 airports around the world as Last Points of Departure. Airports in that category typically have enhanced security screenings and advanced technology that include explosive trace detection. Before clearing an airport as a Last Point of Departure, TSA among other things assesses the intelligence and counterterrorism capabilities of the country where the airport is located.

“We are indeed delighted that JKIA has been granted the Last Point of Departure status. This will now permit us to fly daily non-stop flights to John F. Kennedy International Airport (JFK) New York as scheduled on October 28, 2018,” Mikosz said at yesterday’s ceremony that was attended by Kenya’s Transport Minister, James Macharia and the chairman of the Kenya Airports Authority (KAA) Isaac Awuondo. The authority manages Jomo Kenyatta International Airport.

Mikosz and his management team were in New York in April to brief US media on the airline’s entry into the US skies. You can read that report here.

The daily non-stop Nairobi to New York flight is expected to boost trade and tourism between the two countries. The US recently surpassed the United Kingdom as the number one source market for tourists and Kenya’s ambassador to the United States, Robinson Njeru Githae, recently told Mshale his country intends to grow the numbers.

At yesterday’s ceremony, Ambassador Godec indicated his country’s desire to make Kenya’s wishes of more tourists from the US come true when he said “I’m very pleased today to provide U.S. approval for Kenya Airways direct flights between Nairobi and New York. These flights will connect our people. They will make travel easier for tourists, business people, students and everyone. We have worked hard side by side to make this possible.”