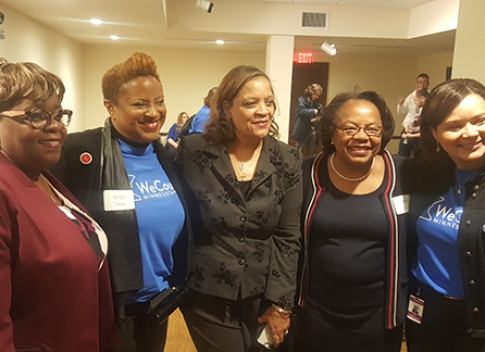 Minnesota governor Tim Walz and U.S. Census Bureau regional director Marilyn Sanders on Monday helped kick off the yearlong countdown to the April 1, 2020 census at the Minnesota State Capitol. Walz said “The ability to have a fair democracy is incumbent on every single person being counted.” Highlighting his administration’s push for $2.5 from the legislature to support census outreach initiatives, he called the census one of the “one of the truly non partisan issues that will come under this dome,”

Sanders whose regional office in Chicago covers eight states including Minnesota said the state has the second highest response rate based on the 2010 census. The census is used to apportion congressional seats as well as determine the amount of federal aid each state receives.

In the 2010 census, Minnesota as able to keep its current slots of eight congressional seats when it beat the next state by just 8,739 people. There are concerns again this time that it is in a similar situation as the state’s population, while growing, is not growing as fast as others. there are also concerns that hard to count populations like immigrants might be put off by the citizenship question that is pending at the US supreme court. Lower courts have rejected the Trump administration’s attempts to include the citizenship question. The administration has appealed to the supreme court and a decision is expected this summer with arguments before the court stating on April 23.

The Census Bureau however seems unfazed by the politics surrounding the citizenship question. Responding to questions from the media at the St. Paul event, director Sanders said “Our message is that we’re prepared to count everyone. The census is confidential and the census is safe,”

Minnesota attorney general Keith Ellison announced this week that the state is joining 17 other states in challenging the Trump administration’s decision to include the citizenship question. There is feat that the question might lead to an undercount of immigrants, impacting crucial federal aid to the state.

The census is also currently hiring thousands of temporary workers as it prepares for the count next year. To apply for the jobs available, follow this link.