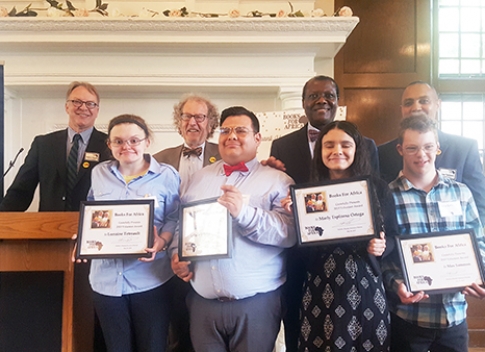 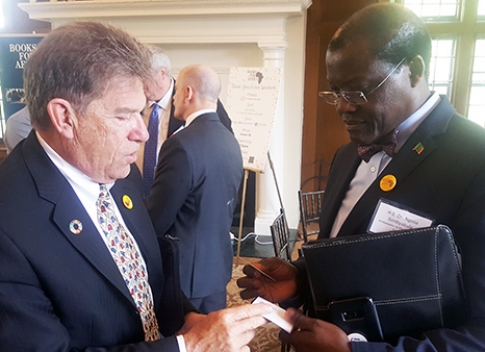 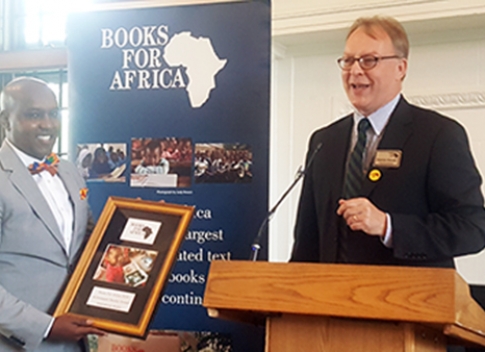 ST. PAUL, Minn. (Mshale) – Books for Africa (BFA) held its annual fundraiser luncheon Thursday at the Town and Country Club with 300 people attending.  This year’s African ambassador speaker was Dr. Ngosa Simbyakula, the ambassador of Zambia to the United States. Sponsored by Thomson Reuters, Bremer Bank, Lerner and the University Club, the event was expected to raise more than $100,000 for the organization once all numbers are tabulated.

“The 44 million books and counting that Books for Africa has shipped to Africa for the last 31 years, has touched and changed the lives of millions in the continent,” said Ambassador Simbyakula. “Most of Africa are still youth, so through your kindness you are helping to educate Africa’s future.”

The ambassador said that the books sent also helps in strengthening democracy and the rule of law in the continent, adding that a well-informed electorate is “vital to a thriving democracy.”

“The bible says God loves a cheerful giver and that is what you are,” said Simbyakula.  “I would therefore beseech the almighty to add many more years to your life, so that you might continue the wonderful work you are doing. Through books, you are giving Africa the greatest gift of all”

This year’s program was moderated by Books for Africa board president Jote Taddese while former board president Rosemond Sarpong-Owens moderated the ask portion of the luncheon. Highlights included the unveiling of a 30th anniversary short video that was shot last year featuring testimonials from supporters and recipients of books in Africa. “My US dollar goes further with this organization than any other non-profit based in the US,” said former board president Luanne Nyberg in the video.

BFA benefactor Frank Babka, as in previous years, committed to match any new container sponsorships pledged at the luncheon – a two for one deal. A container typically contains over 22,000 school textbooks. Kenyan-American Mutune Mutisya who has a project in the works with BFA to ship a container to his hometown in Kenya, was eager to sign up for a new container project to take up Babka on his offer. “(This) is a sweet deal man,” he said, beaming.

Books for Africa founder Tom Warth, spoke of the urgent need to increase book shipments to the continent, saying there are still millions of children that do not have access to reading material, despite the millions of books the organization has shipped.

Earlier at a breakfast reception at the University Club attended by its top donors known as the Kilimanjaro Society, Books for Africa honored its volunteers and donors. In a moment that drew heartfelt applause, the organization bestowed its Volunteer of the Year Award to students from the Metro Deaf School of Saint Paul. The students have been regulars at the Books for Africa warehouse in Saint Paul, volunteering to help sort and pack books, according to Patrick Plonski, BFA’s executive director.

Also honored by Books for Africa was prominent businessman, Abdirahman Kahin, a member of the Kilimanjaro Society. Members of Kilimanjaro are donors who give at least $1,000 annually, but Plonksi heaped praise on Kahin for being a longtime high-level donor and also helping BFA during its many events with food and other assistance. Kahin owns the popular Afro Deli whose delicacies have become mainstays at Books for Africa events.

Notables attending this year’s luncheon included Minnesota Attorney General Keith Ellison, Liberia’s Consul General in Minnesota Jackson George and former Minnesota Secretary of State, Mark Ritchie who now heads Global Minnesota. Plonksi noted that Ellison has been a longtime BFA supporter such that when he was a congressman, he would take along books from the organization during congressional trips to Africa.