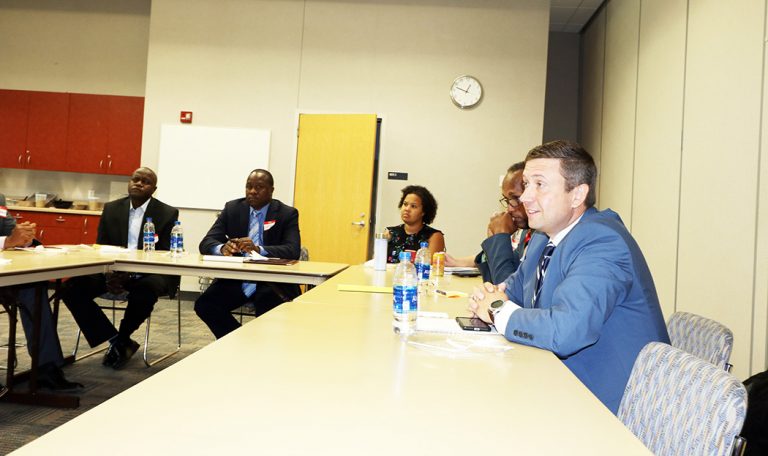 BROOKLYN CENTER, Minn. (Mshale) – Minnesota’s state Democratic party chair, Ken Martin, held a roundtable discussion on July 26 with a dozen leaders and community organizers from the African immigrant community. The objective of the round table was to initiate dialogue as well as strengthen relationships and partnerships with what has become an important voting bloc as the once reliable blue state has become more competitive. The state which has voted for the Democratic presidential nominee since 1976 almost flipped for the Republicans in 2016 when Hillary Clinton beat Trump by the narrowest of margins 46.4% vs. 45%.

Friday’s meeting was organized by the party’s Civic Engagement Director, Ian Oundo, himself an African immigrant and the highest ranked African that either party has hired at the leadership level in the 24 years Mshale has tracked Minnesota politics.

Minnesota boasts the highest voter turnout in the nation and despite the large engagement there’s still room for growth in the electoral process. The upcoming 2020 elections is a huge motivator behind the DFL’s quest to organize and try to capture voters from all demographics of the country. Minnesota governor Tim Walz held a large town hall with Africans in June in Brooklyn Park, the epicenter of African civic life in the state. That city is in the Third congressional district which Democrats finally flipped in the last midterms after the seat had been in Republican hands for years, with the burgeoning African bloc playing an important role in the victory. In the rural districts of Minnesota elections can be swayed in thin margins. “People win elections with just five votes,” said Jude Nnadi a member of the Minnesota African Coalition. Mr. Nnadi’ s statements were in support of the importance in increasing voter turnout.

The meeting was also held to encourage community members to be more civically engaged. The recent rise in xenophobia and hate crimes around the country has struck fear amongst Americans who belong to various minority groups. “The way to cut through this bigotry is showing that you are…present,” said Martin. “You have to show up and be seen”.

The conversation on Friday also revolved around holding the party accountable after elections. Too often candidates seek out support from minority communities during campaign seasons but later fail to fulfill their promises.

Community organizers are working tirelessly to engage their members and encourage them to take part in the electoral process. Recent executive orders and immigration stances of the current administration are leaving some Americans fearful of the future. “It is very important [to vote] because it is our life that is on the line,” said Lillian Maswai treasurer of Gotabgaa International an organization that connects members of the Kenyan diaspora around the world. “If we don’t vote we are endorsing what is happening”.

With the 2020 elections soon approaching it is important for voters to be educated in the electoral process. You can visit the secretary of Minnesota’s state website to learn more about voter registration as well as gain information on how to file as a candidate.