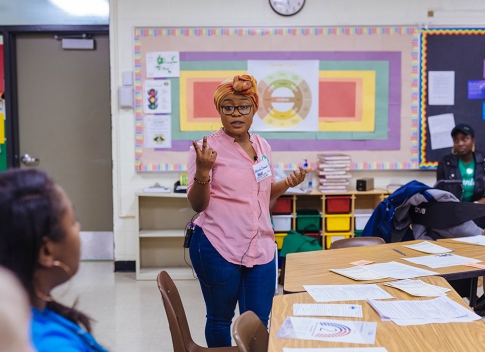 Activist and community organizer Alfreda Daniels on Tuesday May 19 officially filed to run for one of two seats in the Brooklyn Center City Council. A few days before filing, she spoke to Mshale and said she is hoping to leverage her expertise as an organizer with a local union to fight for workers’ rights.

“I am running to represent the interests of all workers, especially those living in Brooklyn Center,” she said.

She is a familiar figure in union politics with twelve-years of experience working for one of Minnesota’s largest unions, the Minneapolis Regional Labor Federation where she honed her skills advocating for progressive policies that favor the city’s work force.

Unemployment in the city has in recent years been running higher than the state average of around 3% (pre COVID-19). The city has been working on a new master plan that is expected to inject vitality into the city. Part of the master plan includes an 81-acre zone that stretches from the former Brookdale Center mall to the area around Highways 694 & 100 that has garnered a lot of regional attention.

It is in high profile projects as this that Daniels says she wants to utilize her expertise to ensure that the residents of Brooklyn Center are not forgotten in the planning to ensure they are provided fair wages and healthy work environments. “[I want] to make sure that they are providing economic growth for our residents,” she said.

“I understand the power of our local government,” she said. Adding that council members have the opportunity to vote for issues that directly affect residents.

Daniels was born  in Liberia at the height of the Liberian civil war which forced her family to flee to neighboring Côte d’Ivoire, and eventually to a refugee camp in Ghana. They lived there for six years before moving to the United States.

In addition to her well known profile as a union organizer, Daniels is also co-founder of Black Immigrant Collective whose focus is to elevate the voices of Black immigrants in Minnesota. BIC has been in the frontline during the COVID-19 pandemic as the voice of black immigrant workers at meat packing plants that have complained of unsafe working conditions.

City council races are non-partisan races but on May 7 Daniels received the Democratic Party endorsement during the Senate district convention. Where the race goes from here depends on how many candidates file for the two open seats. If more than four candidates file, there will be a primary on August 11 to nominate candidates for the November 3 election.

To learn more about Daniels and her campaign you can visit her website: alfredadaniels.org/