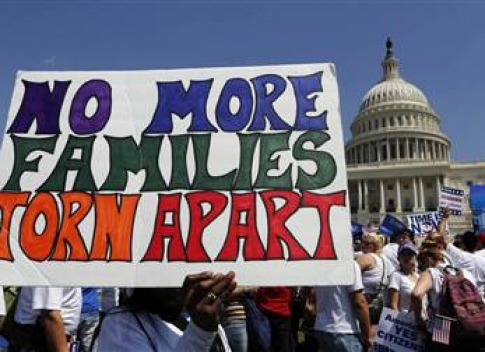 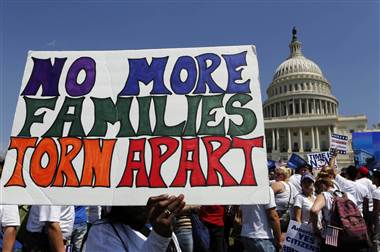 Despite a landmark comprehensive immigration reform bill that cleared the Senate in June, a corresponding bill that addresses the 11.7 million undocumented immigrants in the United States has yet to come to a vote in the House. In fact, the only immigration-related bill that House members brought to a floor vote was a measure to pave the way for deporting undocumented immigrants between the ages of 16 and 31. But although the year ended without a victory on the greatest potential avenue for reform through a bill in Congress, the immigration reform movement achieved other crucial victories in 2013. Here are eight:

1. Driver’s licenses and state tuition: In 2012, only three states granted driver’s licenses to the undocumented. Now, 11 states — California, New Mexico, Utah, Washington, Illinois, Nevada, Oregon, Maryland, Vermont, Colorado, and Connecticut — and the District of Columbia have passed legislation that allows the undocumented to legally drive.Studies show that giving driver’s licenses to unlicensed drivers, a category that includes many undocumented immigrants, would vastly improve public safety because drivers would have to pass a test before they obtain a license and buy auto insurance. This year, Colorado, Minnesota, and Oregon also passed laws that permit in-state tuition for undocumented students.

2. Key anti-immigrant research discredited: The Heritage Foundation published a report in April that reform opponents hoped to use against the Senate bill. The paper, which argued that immigration reform would be a $6.3 trillion burden on the economy, was immediately slammed by Republicans, Grover Norquist’s Americans for Tax Reform, American Action Forum, and the libertarian CATO Institute for its dishonest methodology. Soon after, co-author Jason Richwine resigned from Heritage over his controversial Harvard University thesis that argued Hispanics are less intelligent. A report that once was the opponents’ powerful weapon during debates on reform was now seen as widely discredited.

3. Local and state anti-immigrant laws blocked: In Arizona, the Ninth Circuit of Appeals upheld a district court’s preliminary injunction on a key provision of the state’s controversial anti-immigrant law which would have made it illegal to give rides or provide shelter to undocumented immigrants. The opinion called the statute “incomprehensible to a person of ordinary intelligence and is therefore void for vagueness.”

Alabama passed the nation’s strictest immigration law in 2011, modeled after ALEC’s “No Sanctuary Cities for Illegal Immigrants Act.” Key provisions of HB 56 designed to encourage racial profiling and make immigrants’ daily lives difficult to impossible, have been permanently blocked. The final legal settlement this fall with the Justice Department, civil rights groups, and plaintiffs prevents the worst of the law, which barred school enrollment, business, and daily interaction with undocumented immigrants.

Elsewhere, the U.S. Court of Appeals for the Fifth Circuit struck down a Texas town’s ordinance that prohibitedlandlords from renting to undocumented residents. The Third Circuit Court of Appeals in Philadelphia also ruled that anti-immigration city ordinances in Hazleton, PA infringed on federal immigration policies and the Fourth Circuit Court of Appeals similarly issued decisions against an anti-immigration South Carolina law that would have among other violations of federal immigration policies, criminalized undocumented immigrants seeking “shelter.”
4. Obama used administrative measures to ease restrictions on undocumented immigrants: One year after the Deferred Action for Childhood Arrivals (DACA) program was implemented, at least 455,455 undocumented immigrants under the age of 31 got a taste of what it would feel like to have legal status, when they were granted work authorization and temporary relief from deportation. The President also issued a few “prosecutorial discretion” memos, advising federal immigration officials to avoid deporting people who are parents of U.S. citizens or if they areimmediate family members of military personnel. Still, neither the work authorization nor the temporary deportation reprieve is permanent and many immigrants who would otherwise qualify for discretion are still flagged for deportation.
5. CA and CT limited deportations of non-violent immigrants: The TRUST Act rebukes federal policy by limiting local law enforcement’s compliance in screening and detaining undocumented nonviolent immigrants. The new law in California, a state with 2.45 million undocumented immigrants, should ease community fears of reporting crime because of deportation threats.
6. Republicans joined the call for citizenship: Within the span of one week in November, three House Republicans — Reps. Jeff Denham (R-CA), Ileana Ros-Lehtinen (R-FL), and David Valadao (R-CA) — signed onto a comprehensive immigration bill introduced by House Democrats. They pressed House Speaker John Boehner (R-OH) to allow the bill to come to a vote on the House floor before the end of the Congressional year. That plan never transpired, but Boehner’s choice to hire Rebecca Tallent to lead immigration efforts renewed hope that House Republican would act on the issue in 2014.
7. People are limiting their use of the term “illegal immigrant”: A Pew research study released in June found that the use of the phrase “illegal alien” declined in 2013 and that the term “undocumented immigrant” rose (especially among immigrant advocates). Not coincidentally, immigration advocates have campaigned hard to make people understand that the phrase is derogatory because “no human is illegal.” Newspapers like the Associated Press, the Los Angeles Times, and the New York Times have all limited their use of the phrase “illegal immigrant.” And after a college conservative group was set to hold a “Catch An Illegal Immigrant” game on the University of Texas at Austin campus, the event sparked a protest held by hundreds of solidarity activists and the actress America Ferrera.
8. Majority of Americans support comprehensive immigration reform that includes a citizenship provision: The final g”immigration win” involves the strong backing of the American public. A November 2013 poll found that 63 percent of American voters support allowing undocumented immigrants to become citizens as long as they meet certain requirements (like paying back taxes and fines, learning English, and passing a background check). Even voters living in 17 key Congressional districts represented by House Republicans opposed to immigration reform similarly support reform legislation when the details of the bill are fleshed out.