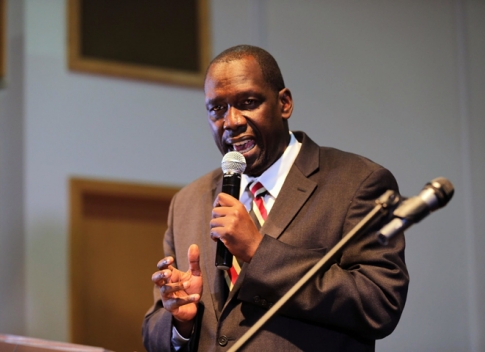 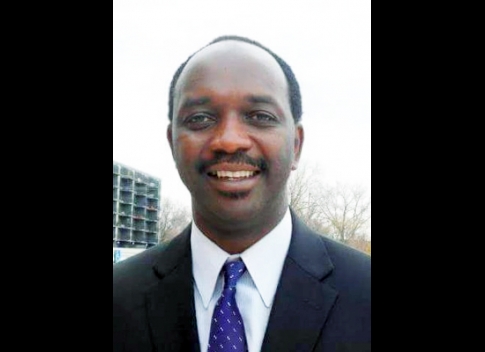 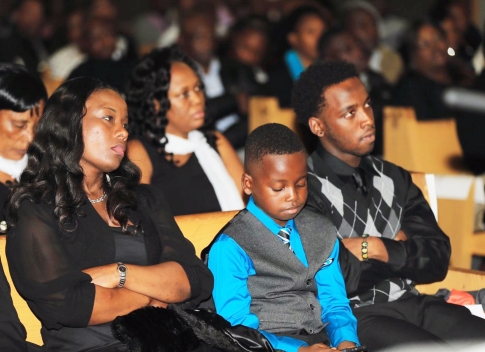 BROOKLYN CENTER, Minn. – There was not a single empty seat inside the Kenyan Community SDA Church on the day the Kenyan-American community in the United States came to say goodbye to Henry Gichaba. Robbinsdale police, responding to a welfare check call found him dead in his apartment where he lived alone the morning of November 3.

On Sunday, all the pews were filled with Gichaba’s family, friends and others who just knew of him through his writings. Those who came in later had to follow the proceedings from the vestibule as the ushers declared the main sanctuary full.

A  Kenyan’s death in Minnesota, when you exclude the elderly that travel here from Kenya for treatment, still remains a rare occurrence which serves to bring the community together.

A procession of his extended family, most from other states such as Texas and North Carolina, barely holding back tears, went on to describe their lives growing up with Gichaba in Kenya and during his stay in America.

Gichaba is survived by his two children, Trevor, a sophomore at Morehouse College and Tyler who is in middle school and his wife Jackie. The three traveled from North Carolina where they live.

One by one, and sometimes in pairs, they went on stage to describe the Gichaba they knew. Most were stoic as they gave tribute but some needed support to get through as emotions overwhelmed them.

Just below the stage where they were giving tributes was Gichaba’s open casket, surrounded by wreaths and a blown up photo of him.

“Henry was an intelligent man,” one relative said. “He always encouraged us to be strong in the face of adversity.”

One relative described how Gichaba could smile through adversity. “He always had time for us,” another one said.

Gichaba’s accomplishments as a public intellectual were also brought up in the remembrances by relatives. One narrated how the late Gichaba helped him with a thesis paper, a task that seemed effortless on his part.

Gichaba’s cousin, Geoffrey Gichana, said that politics was a passion that he shared with his departed cousin. “We did not always agree, but he was a mentor nonetheless.” “In that sense, I will miss him,” he said. Gichana, a leader in his own right as president of the influential Mwanyagetinge organization, displaying the opportunism of a politician, wasted little time in taking advantage of the rare large audience the memorial service provided to advance a pet topic of his. He implored Minnesota Kenyans to have the same level of engagement with other important community initiatives that do not involve fundraising for funeral expenses. On a weekly, sometimes daily basis, Kenyan online and offline diaspora groups are filled with solicitations for funeral expenses for dead relatives either in Kenya or somewhere around the world. Gichana and other Minnesota Kenyan leaders have been working for some time to channel the energy and resources to other initiatives for the community that will allow it to carry its weight in Minnesota as the fourth largest African community after the Somalis, Ethiopians and Liberians.

The already somber mood got even more so when his wife and sons came up on stage to eulogize Gichaba. The older son spoke first followed by the mother. “He was the smartest person I ever knew and he loved his family very much,” oldest son Trevor said. “And he always provided for us.”

“He loved his boys so much,” Mrs. Gichaba said as she started to tear up, “he was a good father.” She pledged to continue raising her sons to continue the deceased’s legacy.

The somber mood was broken briefly by one Henry Tirimba, a burly retired senior Kenya police officer, who provided some comic relief and near controversy. “The Gichaba I knew is the one back in Kenya, that is the one I knew very well,” eliciting laughter as he went on with a down-home style that relieved the tension in the sanctuary. He described how after Gichaba moved to Minnesota about five years ago, he found a confidant in Tirimba “because of all he was going through which I cannot tell you,” he said, to more laughter from those in on the joke. Tirimba seemed to be describing a sort of kindred spirit that developed between him and Gichaba over time as two men in similar circumstances, of husbands no longer living under the same roof with their spouses.

Tirimba concluded with an unexpected parting shot at Kenyan women in the US that went on for almost a minute. He implied they were not being good wives and asked them to shape up. Most of the women quietly listened but some frowned their disapproval and one mumbled “where is the emcee?.”

The elderly Tirimba’s outburst compelled Pastor Eric Mokua to address the unexpected subject matter when he took to the pulpit to deliver the day’s message. In a rebuke to Kenyan men before he segued to his prepared sermon, he lamented that some men upon arriving in the United States “have lost direction.” “Be a man and come back to yourself, as you still have an identity.”

Mokua’s remarks were alluding to a sense in the community that the state of Kenyan marriages in Minnesota was far from healthy. Those that moved here already married facing the most risk. Support groups have been created to support the church in strengthening the family structure. A prominent one for men being the nascent Global Fatherhood Foundation headed by Sam Mwangi, an outgoing City of Champlin Environmental Resources Commissioner. Another support group has also recently emerged to support battered women.

Pastor Mokua’s sermon however was about comfort for the Gichaba family. He spoke of the late Gichaba as a man who was about to come back to God after being away from church.

“He was a good man but also very philosophical,” Pastor Mokua said. Gichaba, author of two books, Eyes from Beyond the Grave and I apologize, was not shy about stating his belief in the theory of evolution as opposed to creationism that a man of the cloth like Mokua preaches every day. “He challenged me all the time,” said Mokua.

Gichaba’s book Eyes from Beyond the Grave explores the tussle between Christianity and traditional practices (including witchcraft) that his Gusii community in western Kenya experiences. The majority of the 10,000 plus Kenyans in Minnesota hail from that community.

Pastor Mokua’s response to Gichaba was to invite him to church. “We convinced him to come to church one day, and after it was done he said he felt good.” Mokua went on to explain that on subsequent encounters with Gichaba, he expressed a wish to visit church again. “I was looking forward to baptizing him,” said Mokua, adding that Gichaba went away “too soon.”

Anchoring his sermon on John 14 and Psalm 23, Mokua told the congregation not to fear talking about death, saying that “to understand life you have to talk about death.” Adding that when you live like every day is your last day on earth, it will spur you to prioritize what is essential.

Addressing Minnesota Kenyans’ proclivity for 16 plus hour shifts, Mokua advised them to allow time for quality time with their families. “Men, you might do all the doubles (16 hour shifts) but when you die some other man will enjoy your fruit instead” said Mokua to the audience’s laughter. Urging them to enjoy their fruit now with “their wives.”

Gichaba’s family had announced earlier that he will be cremated according to his wishes.

Kahin of Afro Deli and Jaylani Hussein to serve on Minnesota...