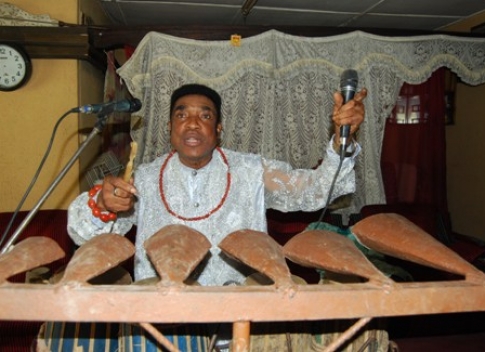 Minnesotans are in for rare treat this weekend when Okpan Arhibo takes the stage at the Country Inn Suites in Coon Rapids on Saturday (July 23). He is on a 15 state tour, marking the first time that an Urhobo traditional musician is performing in the United States according to the national promoter, Dr. Jude Onakpoma, when he spoke to Urhobo Today in advance of the tour.

Arhibo is known as the King of Urhobo music with 200 albums to his name. Urhobo is the fifth largest cultural group in Nigeria and the largest in that country’s oil-rich Delta State.

Known for its distinctive energy, Urhobo music and dance is marked with a high tempo beat with some pidgin english thrown in. Okpan Arhibo’s most popular hits Konojuwe and Urhobo Makosa sold a whopping 10 millions albums according to Urhobo Today.

“For the Twin Cities, this is a truly rare event,” Atare Agbamu, a Twin Cities financial executive who hails from Nigeria’s Delta region told Mshale. Agbamu had the privilege of having chief Arhibo perform at his wedding 27 years ago when the musician was then a rising star among Urhobo musicians.

If you plan to go: