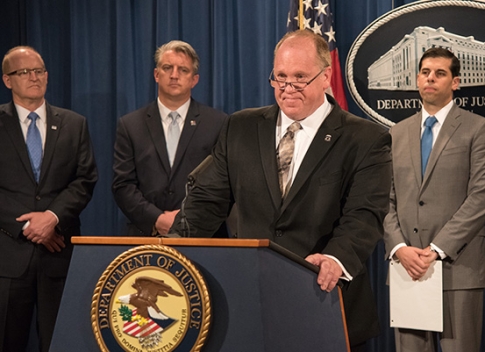 President Trump has nominated the man who last month pledged to quadruple workplace immigration crackdowns to be the permanent director of Immigration and Customs Enforcement. The White House announced on Tuesday that Trump has appointed Thomas D. Homan to the position. He has been the acting director since president Obama left office.

His appointment is subject to Senate approval.

During a speech last month at the conservative Heritage Foundation think tank, Homan pledged to increase workplace enforcement of immigration laws. He said he has instructed Homeland Security Investigations (HSI), the investigative unit of ICE, to look into potentially quintupling worksite enforcement actions next year.

“We’ve already increased the number of inspections in work site operations, you will see that significantly increase this next fiscal year,” he said.

“Not only are we going to prosecute the employers that hire illegal workers, we’re going to detain and remove the illegal alien workers,” Homan said at Heritage.

The White House’s announcement of Homan’s appointment came about a day after a blistering letter criticizing Homan by the Union that represents ICE workers. Chris Crane, president of the National Immigration and Customs Enforcement Council, accused Homan of mismanagement.

In the latter to Trump that the union chose to make public it said among others “While you recently stated publicly that you were “not happy” with the $400k in private jet usage by your former HHS Secretary Tom Price leading either to his firing or resignation, ICE’s Acting Director Thomas Homan is spending millions every year to provide free vehicles and gas to hundreds of ICE manager for the sole purpose of driving between home and work each day. Where do they get these vehicles? They take them away from their own officers and law enforcement operations in the filed leaving officers with insufficient equipment to perform the Agency’s mission.”

Trump was the first presidential candidate to ever be endorsed by the Union largely due to Trump’s promise to bolster enforcement operations.

In Homan’s 10 months in office in acting capacity, more than half of the increase in arrests have been of undocumented immigrants who had committed no crime other than illegally residing in the United States. Immigration experts predict that if the arrests continue at the current rate, they will surpass the highest annual numbers reached under President Obama in Donald Trump’s first year in office.

Homan is known as a hardliner when it comes to immigration enforcement. In July he suggested that mayors of “sanctuary cities” be charged with violating immigration laws because of their practice of shielding immigrants from federal immigration officials.

In June while giving testimony before the House Appropriations Committee he said “If you’re in this country illegally and you committed a crime by being in this country, you should be uncomfortable, you should look over your shoulder. You need to be worried.”

Trump’s new executive order on immigration: What You Need to Know