Tom Gitaa - April 23, 2006 0
United Nations Secretary-General, Kofi Annan, yesterday cited the war in Iraq as his greatest disappointment during his tenure at the helm of the world body. Mr. Annan was speaking at Macalester College in Saint Paul, Minnesota  when he addressed the convocation ceremony to launch the college’s new Institute for Global Citizenship. The Secretary-General graduated from the college in 1961.

U.S. Bank received an appreciation award from the Lake Street Council in Minneapolis recently. The award was given to U.S. Bank during the council’s annual meeting at the Lyndale VFW. 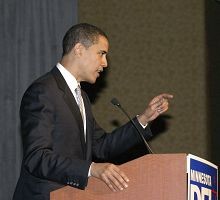 Obama Brings his Magic to Minnesota

US Senator Barack Obama wowed Minnesota yesterday when he visited to keynote the sold-out $125 per ticket Hubert H. Humphrey Day Dinner, a fundraiser for Minnesota ’s Democratic Party (DFL) and to campaign for Amy Klobuchar who is running for the US Senate to take over from fellow Democrat Mark Dayton who is not seeking reelection.

MINNEAPOLIS , April 5, 2006 – In an effort to better serve the community, Minneapolis Public Schools has revised its early kindergarten admission policy to establish standardized criteria for deciding which students are ready to enter kindergarten. Among the changes, students who turn five years of age on or by Oct. 31 may be considered for early admission into kindergarten. Applications for early entrance must be submitted by May 1.

MINNEAPOLIS / ST. PAUL ( 4/5/2006 ) -The University of Minnesota announced today that Nancy "Rusty" Barceló has been appointed the first vice president for access, equity and multicultural affairs and vice provost at the U of M.

MINNEAPOLIS / ST. PAUL (4/4/2005) -- To heighten awareness and understanding about Africa and its people, the University of Minnesota African Student Association (ASA) will host African Nite from 6 to 10 p.m. Saturday, April 15, in the North Star Ballroom of the St. Paul Student Center ,

Since the initial release of Windows XP five years ago, Microsoft has been able to increase its security significantly by releasing updates such as Service Pack 2. However, enormous changes in security features require significant changes in system architecture hence the need for the development of Microsoft's latest Operating System:- Windows Vista.

How To Teach Your Kids To Hold Onto Money

What is the American Dream? One part is the hope of making a good life for yourself.

Another big part is this: To create a better life for your children.

U Guarantees Tuition and Fee Coverage for Qualified Students

Nearly a third of Founders Opportunity Program recipients will be students of color
Higher education has been the "great equalizer" for decades - the best possible path people could take to overcome class, race or ethnic inequalities.

Of Rattlesnakes and Loudmouth Writers

One night while on the road, I found myself in an unnamed hostel bar in some East African town striking up a conversation about freedom of the press.