Julia N. Opoti - October 30, 2006 2
Over the weekend, presidential aspirant, Raila Odinga visited the Kenyan community in Minnesota to ask for its support and discuss his platform. The team he led covered a broad range of topics in a town hall that lasted over four hours and was spent largely drawing clear distinctions between what ODM has to offer compared to what the current administration has been doing.

Ending of TPS : Liberia Has No Capacity to Absorb Returnees

For over 16 years, nearly 20 thousand Liberians fleeing a vicious civil war benefited from an American government hospitality program called “Temporary Protected Status” (TPS), a stopgap immigration measure granted to eligible nationals of designated countries. The program gave Liberians the legal permission to live and work in the United States as long as conditions in their homeland remain precarious.

Julia N. Opoti - October 1, 2006 0
What does StraVision Marketing hope to offer to Africans in Minnesota? Imagine picking up a directory that has a listing of African businesses, such as restaurants, lawyers, hair salons, car sales among others. The number of Africans in Minnesota has continued to grow over the last ten years. Whether attracted by the economic opportunities or coming as refugees, many Africans have decided to make Minnesota their home.

Siyaya Entertains as it Educates about AIDS

Susan Budig - October 1, 2006 0
"We use entertainment as the card to draw the masses," says Reverend Dr. Spiwo Xapile, pastor of JL Zwane Memorial Church, Guguletu, Cape Town, South Africa.  "In between, we put the message," he professes.  The message is two-fold.  Know your status and use prevention to halt the spread of HIV/AIDS. 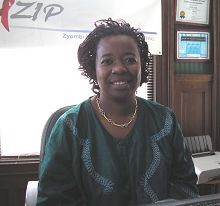 It's been decades since I last heard Muhammad Ali extolling his own virtues.  "I am the greatest; I said that even before I knew I was.  I figured that if I said it enough, I would convince the world that I really was the greatest."

Now that I've met Roy Kapale, Ugandan musician of Souca, Lingala, and Afrobeat music, I've met a self-promoting person who just might have the same uncannily accurate sense of himself.

jaime - October 1, 2006 0
It’s no secret that we are in a digital wireless technology boom and everyday new camera phone technological advancement is on the rise. For approximately six years now, the camera phone technology has been available in the U.S. to consumers nationwide. Unfortunately, image quality and image storage space have always been an issue. Earlier this year, Samsung Electronics Co. Ltd., the brainchild of camera phones, reached another milestone by introducing a new 10 million-pixel (megapixel) mobile phone the Samsung SCH B600.

The Energy Policy Act of 2005 replaced the clean-fuel burning deduction with a tax credit. A tax credit is subtracted directly from the total amount of federal tax owed, thus reducing or even eliminating the taxpayer’s tax obligation. The tax credit for hybrid vehicles applies to vehicles purchased or placed in service on or after January 1, 2006.

The people of Okinawa, Japan enjoy one of the world's longest life and health expectancy with very low rates of mortality from the many chronic diseases that come with aging seen in the United States. Many of them live healthy, active and independent lives well into their 90s and beyond, a phenomenon that has created a great interest in the scientific world. It led to a 25 year study of Okinawa Centenarians that started in 1976 to investigate what makes the people of Okinawa so healthy.

New Procedure for Those Granted Asylum

Igbanugo Partners International Law Firm - October 1, 2006 0
Beginning October 1, 2006, USCIS will implement a new process nationwide for issuing EADs to applicant granted asylum by an Asylum Office. Instead of issuing asylees a provisional one-year Form I-688B employment authorization card at the local office, asylees will now receive in the mail the more secure Form I-766 EAD card within seven to ten days after the date they are issued their asylum approval letters. The EAD will be valid for two years.

In Kenya, Freedom of Speech Rings

But Tribalism Still Stands in the Way

(Editor’s note: Mshale West Coast Correspondent, Edwin Okong’o was in Kenya this past summer as a human rights fellow with the University of California’s Human Rights Center- this is one of the reports he filed. Other reports are available here on Mshale.com)

NAIROBI, Kenya—Fredrick Odhiambo stands with a microphone in the heart of Nairobi’s financial district. Odhiambo, 27, is not a typical Kenyan street performer. He doesn’t preach about God. Nor does he claim to posses the secret cure to impotency or any incurable diseases.