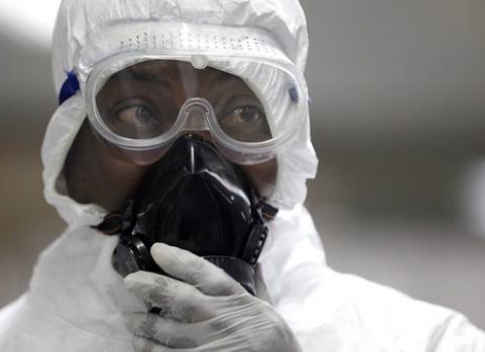 Aid agencies that use the iconic ‘moon suits’ – the odd-looking full-body outfits used in battling Ebola – are running dangerously low as the protective garb is being snapped up by institutions in the U.S.

World Vision, a Christian charity, was reportedly looking to send the hazmat suits to Sierra Leone when they found the items were out of stock. “There’s been some sleepless nights,” Jennifer Mounsey, director of Corporate Engagement, told the Wall St Journal. “We’re all sweating bullets.”

African needs are competing with U.S. hospitals and government agencies which are stockpiling some of the scant supply made by companies such as the Lakeland Industries in Ronkonkoma, NY, that manufacture the chemical suits, boot covers, face masks, hoods that comprise the Personal Protective Equipment or PPEs.

Even the U.S. Centers for Disease Control and Prevention (CDC) ordered $2.7 million in PPEs for its Strategic National Stockpile. According to the CDC, American hospitals and firefighters also need PPEs on hand in case a potential Ebola suspect wanders into an emergency room or dials 911.

Aid groups on the front lines of West Africa’s Ebola virus outbreak say the shortage of protective suits is one more source of stress. These groups already face flight cancellations and travel bans that make it harder to get doctors to the field.

Meanwhile, of the countries that promised money to fight Ebola, little has been delivered: 7 percent of China’s $122 million pledge, 17 percent of the $265 million promised by the EU, and 43 percent of the United States’ $572 million, according to a new website that tracks contributions worldwide.

While the Office for the Coordination of Humanitarian Affairs, the UN, and the World Bank have data on the dollar figures associated with each pledge, little was known how much of those resources have actually made it to the ground in West Africa.

That’s what inspired the nonprofit ONE.org to create the Ebola Response Tracker, which can be found on its website.

The tracker focuses on three specific forms of support: financing, health-care personnel, and in-kind contributions. This “deeper dive” into individual country’s commitments, ONE hopes, will persuade leaders to put their money where their mouth is.

In the financing portion, the numbers are particularly bleak. While China has pledged $122 million to the fight, it has thus far only dispersed 7 percent of that number. Of the $265 million pledged by EU Institutions, just 17 percent have reached the epidemic’s hot zone. Even private institutions, which most likely have less bureaucratic hurdles to deal with, have been slow to pull the trigger. The Silicon Valley Community Fund has thus far sent 0 percent of the 25 million pledged. At the Google/Larry Page Family Foundation, it’s the identical equation.

Erin Hohlfelder, global health policy director at ONE, says the tracker shows the importance in transparency. “It’s one thing to make a great pledge and commit to doing that,” says Hohlfelder. “But in the meantime, every day that goes by without these resources is a missed opportunity.” While progress has been made in the months since those pledges, there is much work still to be done.

According to October estimates from the World Bank, the epidemic could cost the West African countries affected upward of $32 billion in the next 24 months.