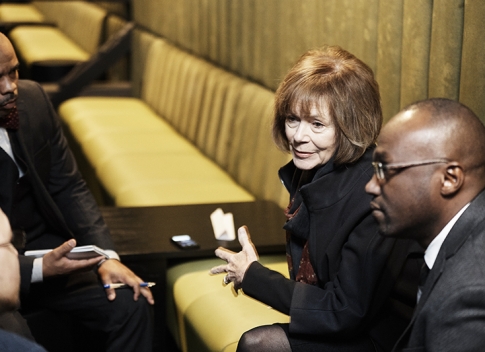 MINNEAPOLIS – Minnesota’s newly minted US Senator, Tina Smith, has strongly rebuked president Donald Trump’s reported calling of immigrants from Africa and Haiti coming to the US as hailing from “shithole countries.”

The junior senator from Minnesota said Trump’s comments “was a dramatic demonstration of his racism.” Smith went on to say that she does not believe the president “understands what this country is all about.” The immigrants that come here make the United States stronger, she said.

Trump made the comments while meeting with lawmakers at the Oval Office to discuss immigration reforms. Top on the agenda was how to provide permanent legal status to DACA (Deferred Action for Childhood Arrivals) individuals which affects individuals that were brought here as children. There is bipartisan support to find relief for them but there is no bipartisan consensus on matters such as the Diversity Visa Lottery that many Republicans want to get rid of. Africans have been some of the main beneficiaries of the Diversity Visa Lottery that targets regions that have had historically low levels of immigration into the United States.

Senator Smith went on to say, “it’s shocking to me that someone who speaks on behalf of our country should be speaking in such hateful terms.”

The president’s derogatory remarks on Africa also elicited a rare press release from the African Union Mission in Washington. In a statement sent over the weekend to Mshale as the storm grew, the AU ambassador to the US said, “The African Union Mission condemns the comments in the strongest terms and demands a retraction of the comment as well as an apology to not only to the Africans but to all people of African descent around the globe.”

In the wide-ranging interview following the Martin Luther King Breakfast, Senator Smith, responding to a question from Mshale said she has not yet started preparing for the November special election where she will be on the ballot to fill the rest of Al Franken’s term. Her appointment to the seat by Governor Dayton is good through the November election. The state constitution then calls for a special election to fill the rest of the resigned Franken’s term.

“I have been very focused on getting the senate office running but I have the website going,” Senator Smith said.

Smith said she would be joining three senate committees: Health & Education, Energy and the Agriculture committee.

Responding to a question from Insight News, Smith said her priorities in Washington would include addressing the nation’s rising health care costs, child and maternal health as well as education with a specific emphasis on the achievement gap. She obliged that Minnesota has the best schools in the nation but they are not working as well as they should for students of color “and I will be working to address that in Washington,” she said.

“I realize Washington has been a divisive place but I will look for common ground on those things that we can get done,” Smith said.