At its 23rd annual awards gala in New York last week, The Africa-America Institute recognized Tanzania for what the organization said was the country’s significant progress in education, environmental conservation, and creating a business-friendly environment.

Agencies - September 25, 2007 0
UNITED NATIONS - Mr. Ban, like many participants at today's meeting, stressed the importance of bringing a sustainable peace to the war-ravaged Darfur region of Sudan, where the Council has authorized the creation of the first AU-UN hybrid peacekeeping force in Darfur, to be known as UNAMID. At full deployment, it will have some 26,000 troops and police officers, making it the largest peacekeeping operation in the world. 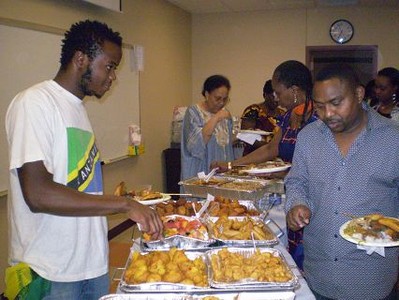 Swallehe Msuya - September 25, 2007 0
The generosity of the Tanzanian people resident in Minnesota was manifest Saturday as they entertained their friends at “A Taste of Tanzania”, an event that had more food than the crowd could handle.

helen - September 20, 2007 1
Sometimes I'm so blinded,
By pain, poverty, hunger.
I fail to appreciate the blessings
Of family, friends, my land.
To see the beauty that surrounds me
In my country Kenya.

Scholar says he is in the race and promises a new direction for the Organization of Liberians in Minnesota.

Wynfred "Billy Dee" Russell, a Liberian-born educator and longtime resident of Minnesota, announced Thursday that he will contest for the presidency of the Organization of Liberians in Minnesota, adding excitement to what is already braced to be a contentious election year.

President George W. Bush extended the stay of Liberians who are on Temporary Protected Status yesterday, ending the anxiety that has been looming over citizens of that country, as the Oct. 1 deadline for them to leave the United States came closer.

Julia N. Opoti - September 10, 2007 0
A non-profit organization started in Minnesota three years ago to help African immigrants entrepreneurs navigate a complicated U.S. financial system, honored some of them Saturday for their success in business.

Nelima Kerre - Mshale Staff Writer - September 10, 2007 0
At midnight, the atmosphere at the Eritrean Community Center was one of a regular social gathering rather than a concert. A few people danced to the East African tunes that DJ Dan from Kenya was mixing on the turntables, but the great majority were in their seats chatting with buddies.

POWDER SPRINGS, Ga. – The detectives investigating the murders of a Kenyan mother and her two daughters, whose badly battered bodies were discovered on Aug. 1 in their Atlanta area home, said they have made significant progress in the case.

Swallehe Msuya - September 4, 2007 1
Teachers of Islam should refrain from actions that go against the teachings of Prophet Muhammad in order to keep the faith of their flock strong, Islamic scholars said at a Minnesota conference held during the Labor Day weekend.
12Page 1 of 2