Brooklyn Park, Mn– Senator Barack Obama made history as the first black man in the United States to be a major political party’s nominee for the office of the president. Obama accepted his party’s nomination in Denver at the Democratic National Convention at the end of August. 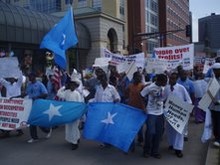 St. Paul, MN-Freedom of expression and the power to summon your government, the two most important principles of democracy played out at the Republican National Convention (RNC) in St Paul, Minnesota. Among an estimated 15,000 protesters that took to the streets of downtown St Paul on Monday, September 1 was about 300 Somalis who were protesting against “the U.S. sanctioned Ethiopian occupation of Somalia.”

You’ve heard it before and it will be said again: we are witnessing history in the making. The 2008 U.S. Presidential Election is right around the corner and the Democratic Party presidential nominee is an individual who has instilled hope and optimism in the hearts and minds of all Americans, including its newest immigrants.

What do you expect from an ensemble of legendary musicians paying tribute to a legend? You expect a performance that will keep you on your feet all night with your hands in the air as you raise the roof. Such was the night granted to patrons at the Dakota Jazz Bar and Restaurant when saxophonist Pee Wee Ellis, horn player Fred Wesley Jr., singer/guitarist Cheikh Lo, singer/guitarist Vieux Farka Toure, singer Martha High, percussionist Pappa Assane M’baye and singer Fred Ross put their incredible talents together to present Still Black, Still Proud: The African Tribute to James Brown.

Book Review: “The Translator: A Tribesman’s Memoir of Darfur”

If God must break your leg He will at least teach you to limp…
In his opening line of the “The Translator: A Tribesman’s Memoir of Darfur”, Daoud Hari least prepares the reader for the tragic events and resulting heartbreak. The book chronicles Hari’s life as a translator for journalists and genocide investigators in the western Sudan region of Darfur and the refugee camps of Chad. His experience is unbelievably true as he comes close to death several times.

Tanzanian author Swallehe Msuya takes you to a quaint village, Ugweno on the slopes of Mt. Kilimanjaro,  in the 1950’s where life was simple and arranged marriages a glorious norm. The Kitchen Party, his first novel, is a simulation of many traditional East African communities.

Afrifest’s Pan-African Historical Exhibit: A fresh outlook on Africa’s past, present and future

The U.S. Attorney General Michael B. Mukasey (AG) recently issued notice that he will review three Board of Immigration Appeals (Board) cases from last spring on the issue of right to effective counsel before an immigration judge (IJ) or the Board. The Board decisions in the unpublished matters, Matter of J-E-C-M-, Matter of Bangaly, and Matter of Compean, are all stayed pending the AG’s review.

Adopting Ethiopian Orphans May Not be the Best Solution

Addis Ababa, Ethiopia - On the outskirts of Addis Ababa a newly built orphanage called Rohobet is hidden among tin-roofed shacks on top of a eucalyptus and pine-covered hill. All around it, dirt roads are turned into muddy rivulets in the midday drizzle.

Minneapolis, MN - “South Africa is open for business,” has been the continued message from the South African government.

As conversations about global warming, energy sources and sustainability become more frequent, I have been forced to ask myself “how long can we keep living like this?”