Liberia at a Crossroads

The election of Ellen Johnson- Sirleaf, the Harvard-educated former World Bank economist as president of is a milestone. She will become the first woman African head of state. 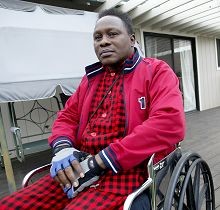 A debilitating injury may have left Kenyan boxing legend Dick “Tiger” Murunga on a wheelchair, but it has not stopped him from fighting. Only this time he is fighting for the rights of people with disabilities in . And, he intends to punch his message all the way to the United States Congress, the United Nations and various international organizations.

Igbanugo Partners International Law Firm - February 1, 2006 0
An Exclusive Column for Mshale by the Law Firm of Blackwell Igbanugo of Minneapolis. The largest Black owned law fim in the United States.

It took the Dixie Chicks at an East/West African-Arab wedding to help me get over my case of Mzungu-Know-It-All. Alright, let’s backtrack.

The South Africans and Kenyans return to Los Angeles’ Home Depot Center Stadium on Feb. 11 for the 2006 U.S.A Sevens Rugby Tournament, an event that past attendees say also serves as reunion for many citizens of the two African countries.

Kemunto Namunyak - February 1, 2006 0
For the past quarter of a century the University of Minnesota has held an annual celebration of the life and achievements of Dr. Martin Luther King Jr. and this year is no different. The 25th annual concert in honor of Dr King will be held Sunday, February 5, 2006 at the Ted Mann Concert Hall on the University of Minnesota ’s West Bank- Minneapolis campus at 4pm. The event is free and open to the public. 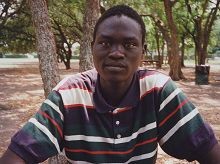 The WALKER ART CENTER in Minneapolis will be screening a 90 minute documentary titled “Lost Boys of Sudan” depicting the plight of 20,000 Southern Sudanese Dinka tribe children driven out of their country during a military conflict that has been around for 20 years. 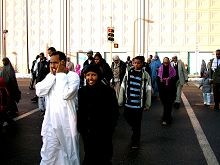 Tuesday January 10 was EID-EL-HAJJ, a Muslim holiday marked annually by families slaughtering animals for sacrifice and protein food. Muslims across the globe numbering 1.2 billion carried out this ritual as a record 2.5 million pilgrims from all over the world completed their visit to Islam’s holiest shrines (HAJJ) in the cities of Mecca and Medina in .

jaime - February 1, 2006 0
Are you tired of waiting in those dreadfully long lines at the movies? Don't you just wish someone would come up with a new technology that would enable moviegoers to walk straight into the movie of their choice without wasting a single minute?

XM Satellite Radio until last winter was the only one of the two satellite radio receivers that carried a channel dedicated to African music, called Ngoma XM. Ngoma is the Swahili word for drum. However, soon after Hurricane Katrina hit and just before Christmas, XM became the grinch and yanked the channel 102 off its lineup of stations on the receiver and consigned it to an online only station.